Don't Miss
Home / Opinion / Together we can do more

I stand here with honour and humility to be afforded and opportunity to debate the state of the nation as we are about to usher in our fourth democratic Parliament.
Madam Speaker after the State of the Nation address, and over the weekend’s inter-action with people made me to realise that at the core of the discussion and the debate, is the issue of SERVICE DELIVERY
So what is service delivery given the achievements and challenges?
Service delivery, in itself, is a term that incorporates two elements, that is a “service” and “delivery”. Service is a social requirement meant to fulfill a particular need, which is more than a felt need but a real need through which normal life comes to a standstill should that need remain unfulfilled, whereas a felt need is more emotional and sometimes populist in nature. Government exists to fulfill real needs, which people and communities cannot assuage on their own. That is where the delivery element comes in.
Government departments have a duty to fulfill needs that are beyond people’s reach and which they cannot live without. Failure to render this important social aspect means we fail our own people, our electoral constituent. Therefore we dare not fail.
It stands to reason, Madam Speaker, that the President in his State of the Nation Address highlighted a number of issues.
Allow me to quote one, I quote:
“In reality a country that does not ensure the involvement of all its population at all levels of economic activity is certainly going to perform well below its actual potential”.
The issue of the land and its wealth has been a question that has formed a cornerstone of the struggle for emancipation of the people of South Africa. The wars of resistance against colonialism and the struggles for South African freedom have been anchored around control for land. It is for this reason that the Freedom Charter acknowledged the importance of a resolution of the land question.
It is no surprise that it has become part of the hotly contested areas during the Congress for Democratic South Africa processes. No wonder that it had to appear in the constitution the way it is.
The ANC has identified five priority areas for the next five years; one of the five is the Rural Development, Food security and Land reform.
The January 8th statement of 2009 has clearly indicated that rural development and agrarian reform is integral to the struggle to create a better life for all.
The rural situation in South Africa is still characterised by division, there are well-developed areas and other deep rural areas where people, especially rural women, continue to live in conditions of degradation and poverty.
Unemployment in rural areas is disproportionately high, and many rural areas lack basic infrastructure such as roads, water and electricity supply.

“Our work is far from complete. We are only in the beginning of a long journey to a truly united, democratic and prosperous society, based on the principles contained in the freedom charter yet we are confident that the strategy and policies we have adopted will take us further towards the goal of a better life for all.”

That is the declaration of the 52nd National conference of the African National Congress.

The African National Congress at its 52nd National Conference in Polokwane on 16-20 December 2007 deliberated on a range of issues, it was resolved that the ANC should strive to do the following, among other things:
The implementation of large scale programmes to establish new smallholders and improve the productivity of existing small-scale and subsistence farmers and to integrate smallholders into formal value chains and link them with markets.
Also, it was further resolved that there is a need to build dedicated state and private institutions that are accountable to the users for the effective and directed support to land reform beneficiaries in general and small holder agriculture and family farms in particular, including through financial support, research and extension, the provision of tools and equipment and the facilitation of market access and cooperation.

The African National Congress through the 2009 Election Manifesto has emphasised that land, agrarian reform, food security and rural development occupy a significant space in the economic transformation of South Africa. This is the same conviction that emerged though the 52nd National Conference Resolution. Indeed President the engagement with people confirm your correctness in acknowledging that the land redistribution programme as well as post-settlement support could have been handled faster and better.
Despite significant progress made over the last 15years, people living in rural areas continue to face the harshest conditions of poverty, lack of access to land and basic services. The ANC is committed to a comprehensive and clear rural development strategy linked to land and agrarian reform, improvement of the conditions of farm workers and farm-dwellers and build the potential for sustainable livelihoods.
Madam Speaker, the ANC will, during the Fourth Democratic parliament focus introduce critical programmes aimed at improving the lives of our people. To mention a few:

All that cannot and will never be a one man’s job, it is something that can be achieved by people hence to echo the theme of the ANC:

Working together we can do more

In conclusion Madam Speaker, allow me to echo Professor Sangweni the Chairperson of the Public Service Commission when he said:

“Much more needs to be done, and that quality and speed of service delivery has to be accelerated. It is through such acceleration that the current government can consolidate its service delivery as it prepares to hand over the baton and usher in a new term of office.”. 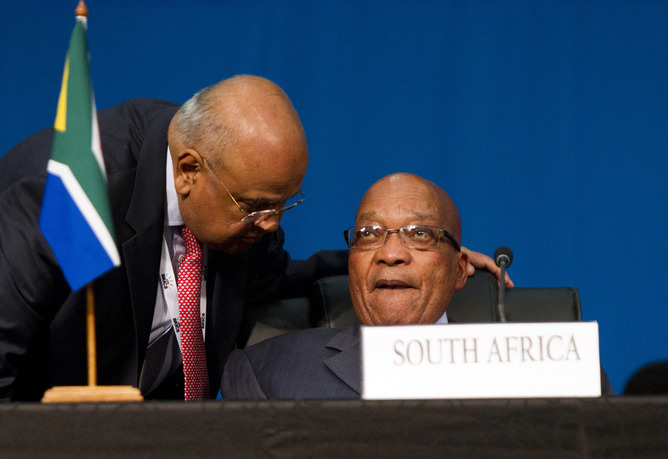 It was the battle between South Africa’s traditionalist president and its modernist finance minister ...