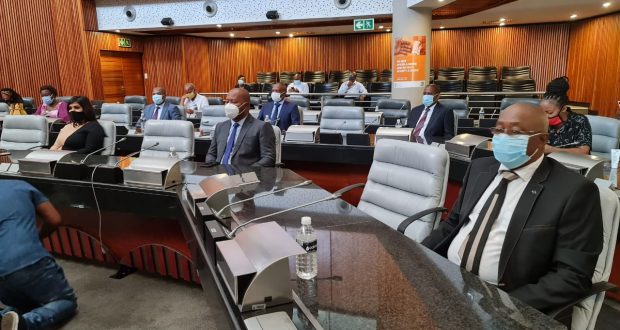 In her first ever cabinet reshuffle, Mpumalanga premier, Refilwe Mtshweni Tsipane, removed four members of the Executive Council (MECs) that she appointed in 2019 and replaced them with at least two younger members who, she says, are committed to work and have integrity.

“I have decided to reconfigure the Executive Council taking a number of considerations into account, key amongst which include members who embody commitment, hard work, integrity and the non-negotiable commitment to bettering the lives of our people,” she said on Wednesday.

Some of those who received the chop, Pat Ngomana, Gillion Mashego, Gabisile Tshabalala and Nora Mahlangu, once served under former premier and now deputy president of the Republic of South Africa, David Mabuza, and were seen as his loyalists.

“True to our commitment to providing a platform for capable youth leadership, we have included a significant number of young people who we trust will infuse vibrancy to re-invigorate the functioning of the Executive Council,” said Mtshweni-Tsipane.

Making a return to the Executive Council are former Speaker of the Mpumalanga provincial legislature, Busisiwe Shiba as MEC for Co-operative Governance and Traditional Affairs (Cogta) and Speed Mashilo to a portfolio that he once occupied – the department of human settlements.

Mtshweni-Tsipane left Mashilo out when she constituted her executive council in 2019.

Mashilo is one of the leaders of the strong ANC faction aligned to acting ANC provincial secretary Mandla Ndlovu, who was once one of Mabuza’s lieutenants, but is also broke ranks with Mabuza.

Ndlovu is believed to be aligned to ANC secretary-general, Ace Magashule, and the duo were instrumental in disbanding bogus ANC branches which helped launch Mabuza into national ANC politics and becoming deputy president of the ANC during the organisation’s historic conference at NASREC in 2017.

The reshuffle, a further blow
to Mabuza’s presidential ambitions.

The reshuffle will undoubtedly deal a further blow to Mabuza who had a reputation of being the de-facto premier running the province from the Union Buildings for the past two years.

This has further limited his chances of replacing president Cyril Ramaphosa as the next president of the ANC and the country as he loses his influence and control of the province.

When the news of the pending reshuffle first became public a few weeks ago, Ngomana, Mashego and other high-ranking Mpumalanga ANC leaders and civil servants who are aligned to Mabuza were photographed alongside the troubled former President of the Republic of South Africa, Jacob Zuma, during an undisclosed visit at his Inkandla homestead. Another crew aligned to Mabuza also made their presence felt during the ANC secretary-general, Ace Magashule’s court appearance on corruption charges in the Free State province – some even singing songs and holding posters which proclaimed him as the next president of the ANC while he protruded from the sunroof of a luxurious black SUV like a starring in an action movie scene.

The public stunts by Mabuza’s loyalists were seen as part of his stratagem to endear himself to the supporters of both politicians in his ambition to ascend to the highest office in the land.

Meanwhile, Mtshweni had a limited pool to choose from in the legislature that was largely constituted of ANC members who have no history in the organisation.

While she claimed in her statement that the was bringing people who have integrity, she will have to polish the battered image of Mkhatshwa and Latchminarain who made headlines soon after their appointments to the legislature in 2019, when Latchminarain’s husband released to the media sexually explicit Whatsapp text messages suggesting that the two legislators were involved in a romantic relationship.

They both denied the allegations that they were in a relationship, while Latchminarain’s husband later apologised for sending out the messages.

Shiba and Mkhatshwa’s elevation to the provincial executive, means that vacancies have now been created for the Speaker and deputy Speaker positions in the Mpumalanga legislature.

Written by: Ziwaphi on 25th Feb 2021.
2021-02-25
Ziwaphi
Previous: Cyril cannot fix the ANC, he must fix government instead, says Phosa
Next: SAHRC strongly condemns the recent attacks on Non-Nationals in the Durban CBD