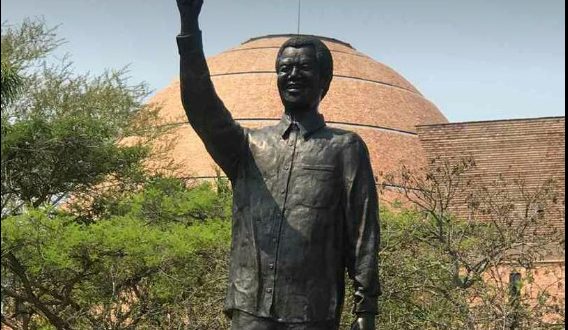 When Mpumalanga premier, Refilwe Mtshweni, unveiled the province’s first Madiba statue, I received a Whatsapp message accompanied by a picture: “This thing doesn’t look like Mandela”, read the message.

As an artist myself, I sympathised with the sculptor, because drawing a portrait of a person is not an easy thing for many people. Creating a sculpture is probably as difficult a task.

Four years ago, I bought paints and a canvas to make my first attempt of Madiba. The manager at the shop asked me, “what are you going to paint?” “Mandela,” I said proudly.

Seemingly instinctively, she noticed that it would be my first attempt at a painting of a portrait.

“Painting Mandela is a difficult one,” she warned, “without any training.”

How did she know that I’m not trained? Only months later I realised that the questions I had asked her about the paints gave me away.

To date, I still haven’t finished that portrait – in fact the pencil version was far better.

Why bring this here?

There are certain basics that I did not know. Thus, having looked at the Whatsapp picture of the Madiba statue, I immediately realised, why, seemingly, so many people were aggrieved.

I will not focus on the facial features, such as the furrowing between Mandela’s eyes, which I’ve never seen. But perhaps there’s a picture of the famous politician which shows that. A friend called me and complained about his feet, that they seem like they have been chained. I looked at the feet, but I couldn’t fault the sculptor on that. But my friend, who usually doesn’t complain, felt that Madiba’s posture was unnatural.

That gave me an idea and I assessed further.

Our Madiba’s shoulders, which do not show a natural movement. His right arm is lifted, but his shoulder is straight as though the arm operates independently of the shoulder.

The left shoulder is equally straight as though the right part of Madiba’s body operates independent of the left.

There seems to be absolutely no co-ordination between right and left parts of Mandela’s body.

Then I went back to his feet, which my friend had been complaining about, I discovered that they also gave the impression that there is no co-ordination of Mandela’s movement.

If the picture was taken while Mandela was walking, which seems to be the case, then Mandela’s movement was unnatural, because when one’s walking, the left arm corresponds to the right leg and the right arm with the left leg.

Now, assuming that the right arm was always lifted – the left arm should always correspond with the right leg.

In Madiba’s case, the left hand follows the left foot, meaning if his right arm were not lifted, it would be moving with the right leg and the left leg with the left arm – that’s so unnatural.

2018-09-29
Tom Nkosi
Previous: Legislature’s Mwale joins the “untouchables” league
Next: The adviser who got R21m, for a half done job