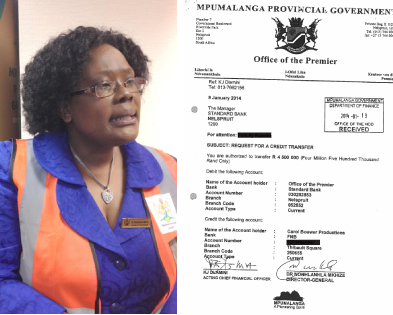 Mandela memorial scandal: R4,5m paid, but for what?

langa premier’s office authorised the payment of R4,5 million to Carol Bouwer Productions (CBP), for an unidentified service as part of the province’s R70 million splurge for the late president Nelson Mandela memorial services in 2013.

This follows the revelations last week that premier David Mabuza’s office had paid R3,077,250 for a video that government officials confirm they have never seen.

This payment was in addition to the R39,796,257.90 that CBP had quoted the office of the premier in December 2013 for staging memorial services for the late president, Nelson Mandela.

Yet, CBO chief executive officer, Carol Bouwer, in a letter titled: Renegotiated Quote, she states that the quote that price that had been quoted originally had been reduced due to the cancellation of some of the events.

“Further to the discussions held regarding the cancellation of the of the last two events due to bad weather predicted, we have done our best to negotiate with suppliers for reduced cancellation fees and where possible non payment at all.”

“We look forward to a speedy turnaround with regards to the adoption of this reduced quote and trust we can expedite the invoicing and payment processes,” reads a letter signed “Carol.”

Seven days later, (18 December 2013) she authorised another payment of R18,379,773.40, meaning that the premier’s office had paid the entire R39,796,257.90 that CBP had originally quoted, even though she had stated in writing that she wanted the provincial government to pay for a “reduced quote.”

On 9 January 2014, however, Mkhize authorised Standard Bank to make the R4,5 million payment to an invoice simply titled: “Additional equipment for mourning centres,” this, in spite of the cancellation of two events.

What is also puzzling is that the date on the invoice for the R4,5 million does not follow the sequence of earlier invoice dates.

“We will have to establish from the internal records and details of conversation regarding the Nelson Mandela memorial, and we will seek the co-operation of the former DG on these issues. We have to reconcile what is in the record with what you are presenting to us,” said Mdakane in February 2016.

Mkhize left the provincial government earlier than her contract ended and while Mpumalanga premier, David Mabuza was on sick leave last year.

The voicemail on her cellphone number that she was using when she was still in the premier’s office says the number does not exist.

At the time of going to print, Carol Bouwer Production spokesperson had not responded to written enquiries sent last week.

City Press online reported earlier this week that the Directorate for Priority Spokesperson for the Crime Investigation (DPCI), also known as Hakws, Hangwani Mulaudzi, confirmed that the corruption-investigating unit is investigating the province’s expenditure of the R70 million.

“We can confirm there is an investigation which kick started late last year.  We received a complaint and hence our involvement.  Unfortunately we cannot say more pending the ongoing investigations,” said Mulaudzi.

2016-05-20
Tom
Previous: Together we can do more
Next: A blow to premier Mabuza as witness’s testimony expunged from court records