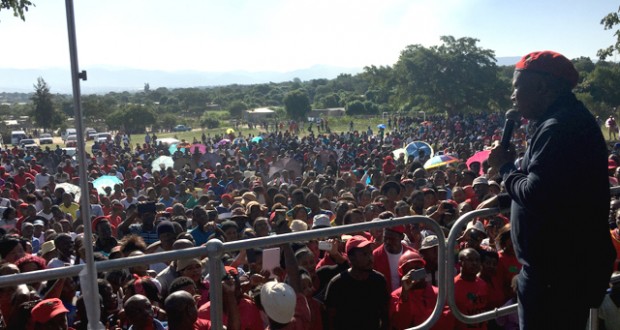 The African National Congress (ANC) in Mpumalanga has blamed the violent disruption of Economic Freedom Fighters’ (EFF) election campaign on what it described as the EFF leader’s “war talk.”

ANC provincial spokesperson, Madileng Thulare, said that while his organisation condemned the violence, it was Malema’s “posture” that provoked the ANC’s supporters to disrupt his events and attack EFF followers.

“The EFF is on a warpath. They said in their national congress that they are going to use any means, including guns to take power from the ANC. All what you see is the war posture, the undermining and insultive derogatory terms, insults to ANC followers,” said Thulare on Thursday evening.

Thulare was reacting to the violence which erupted in Pienaar township, about 25km from Mbombela city where, he claims, ANC supporters were injured during clashes with the police.

He said that EFF members were spinning their vehicles inside the sports field and in the process endangering people’s lives. He said no case was opened against the EFF.

On Wednesday, public order police used stunt grenades, rubber bullets and teargas to disperse scores of ANC supporters who were burning tyres and throwing stones at vehicles carrying EFF supporters in an attempt to prevent Malema from addressing an election rally.

Mpumalanga police spokesperson, Brigadier Selvy Mohlala, said the police had to act against what he described as unlawful conduct, but said that no injuries had been reported to the police.

“The police utilised rubber bullets to disperse them as they crossed the area where they were requested not to go as there were EFF members. Their actions were provocative. They also had dangerous weapons which were not allowed in a gathering of that nature. Some were even drinking liquor in public. Up to so far no injuries have been reported to us,” said Mohlala.

“The EFF wants to put it categorically and on record that the claim of ‘war talk’ by the ANC is rubbish and a way to defend its political intolerance and barbaric acts because of fear of losing power to the EFF in the upcoming Local Government Elections. They are realising that they are losing ground everyday because many of their followers are fed up with them,” said Sedibe.

Malema wrapped up his four-day sojourn in Mpumalanga province on Thursday after addressing fully packed venues of up to three events per day.

Since his tour started on Tuesday, ANC supporters have been following him and occasionally disrupting some of the meetings.

Malema said the conduct of the ANC supporters resembled the commotion that erupted when EFF parliamentarians were forcefully evicted from parliament after they defied an order by National Assembly Speaker, Baleka Mbete, to leave the legislature chamber last week.

“It’s a group of thugs and gangsters. That’s what they do there in parliament, because we defeat them through brains and they beat us up,” he said.

Malema also described the ANC members as empty bottles, in reference to the bottles that they used to attack the police and vehicles carrying EFF supporters.