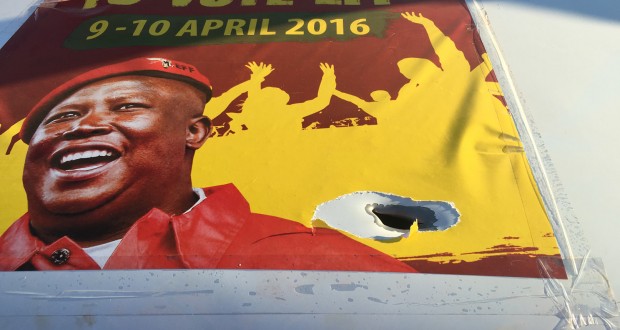 Economic Freedom Fighters (EFF) Commander-In-Chief Julius Malema has blamed the African National Congress (ANC) and President Jacob Zuma for a shooting in which his party member was shot during a rally held in Mpumalanga on Tuesday.

EFF marshal, Senzo Thwala, was shot and injured in the leg when he tried to prevent a man, he described as wearing an ANC T-shirt, from entering the the KaMaqhekeza stadium in KaMaqhekeza (formerly Naas) outside Komatipoort on Tuesday afternoon.

“(President Jacob) Zuma went to the IEC and signed a pledge. He said publicly (that) the ANC will not intimidate everyone, but behind this truck (there’s) a person who was shot today by the ANC. I’m going to write a letter to the IEC to tell them that the ANC does not want free and fair elections. We are not scared of them, because we can also use guns. But we cannot use guns to determine the victory of our people. We want peaceful elections. We want a municipality that is elected by the people,” said an angry Malema.

The South African Electoral Code of Conduct prohibits anyone from unreasonably preventing any person access to voters.

Thwala, who was wounded during the shooting, alleged that his assailant, who was escorting an ANC councillor earlier in the day, had refused to be searched before entering the stadium where Malema was due to address an election rally.

“They (ANC supporters) occupied the open ground not far from the stadium, where our meeting was to be held, claiming that they would be having a soccer tournament. We then moved our meeting to the stadium, and after we had set-up, we were surprised when the same person who had come earlier tried to force his way into the stadium, claiming that they now wanted to play soccer inside the stadium. I requested to search him, like everyone else, but he pulled out a gun and started shooting at us. We ran in different directions, and I think that’s when I got shot. I continued running, but fell down a few metres away,” said Thwala.

No other injuries were reported on the day.

Tonga police spokesperson, Mzwandile Nyambi, said no arrests had been made.

“Yes, I confirm that an attempted murder case has been opened. No one has been arrested, and the police are still investigating,” said Nyambi, on Wednesday morning.

ANC provincial secretary, Mandla Ndlovu, said he will call for ANC leaders in Nkomazi to send him a report.

“I really don’t know what happened, that is why I said I want a full report” said Ndlovu.

Last week, the Nkomazi local municipality issued a letter that prevented activities from taking place in all their stadia, in what was believed to be a ploy to prevent Malema from accessing voters.