Don't Miss
Home / Investigative / Who is this DD Mabuza? 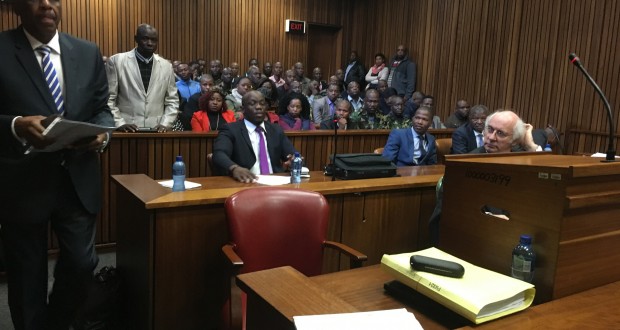 IN THE DOCK: Former ANC Treasurer-General, Dr Mathews Phosa taking a stand in a packed court room at the High Court in Pretoria. His accuser, Mpumalanga premier, David Mabuza is seated on the right.

Who is this DD Mabuza?

A Gauteng high court judge appealed for peace to prevail in Mpumalanga at the end of a gruelling weeklong legal showdown between two of the province’s influential leaders, but the battle seems far from over.

“I wish you all the best, maybe tensions can subside in that part of the world – I hope so – I wish you have a safe trip to Nelspruit,” said Judge Bill Prinsloo after he reserved judgment in the lawsuit case where Mpumalanga premier, David Mabuza, is suing businessman, Mathews Phosa for R10 million for defamation.

Mabuza’s claim emanates from a document that Phosa passed on to the African National Congress’s deputy Secretary General, Jessie Duarte, which details incidents that suggests Mabuza may have been an informer of the apartheid regime.

Mabuza has denied the allegations.

The tensions between Mabuza and Phosa were so evident that even Mabuza’s legal representative, Advocate Etienne Labuschagne, quizzed Phosa why he did not once greet Mabuza throughout the week.

Mabuza’s supporters, who had been bussed at the instruction of ANC provincial secretary, Mandla Ndlovu, could not hold their fury, when Phosa testified about his April 2, 2014 meeting with African National Congress deputy secretary-general, Jessie Duarte, in which the latter asked, “Who is this DD Mabuza,” according to Phosa’s testimony.

There was a sigh of relief when Phosa testified that he said good things about Mabuza, but Phosa’s tone changed when Mabuza’s legal representative cross-examined him, and this time, his response had a sting in the tail.

“He (Mabuza) was a young boy when I recruited him,” he told the court.

This, Mabuza did not need, because he is no longer the young boy that Phosa recruited in the late 1980s.

He was now in the “political premier league”. He even proved this by mobilisin scores of supporters who took over Tshwane’s church square on the fourth day of the hearing.

Some of Mabuza’s “troops” who gave him a guard of honour in the streets of Tshwane, some drabbed in military fatigue, some similar to that of the ANC’s military wing, Umkhonto Wesizwe (MK), even swore at Phosa on one occasion, almost preventing him from getting into his vehicle.

Mabuza won the street battle hands down, but the real battle was not in the streets, it was inside Court Room No G4.

And this is where Mabuza suffered setback after setback, and by the end of the week, like a chess-game, every piece that his legal team touched, was a checkmate!

Mabuza legal team had to prove that Phosa’s actions amounted to defamation, but Phosa’s legal team led by Maritz, punched holes in Mabuza’s case from the first day.

He had to concede that Phosa did not cause the publication of the focus in the media, even before Phosa testified. That was the beginning of the collapse of Mabuza’s case, as it turned out that it was Mabuza who had informed the media about the so-called spy report.

On the second day, Mabuza’s star witness, Jan Venter, did not do Mabuza any favour when he admitted that he lies whenever he is faced with difficulties, and that when he approached Mabuza to tell him that Phosa had authored the document, he wanted to alienate him.

On day three, Mabuza scored what seemed like a political own goal, when he called the man who is alleged to have been his handler, an apartheid security branch policeman, Jacobus Venter to testify for him, leaving many people wondering what the  relationship between the two was, but to Mabuza’s detractors, it was confirmation that their relationship may be going a long way back into the dark apartheid past.

Venter’s name, like those of his fellow security police, used to evoke fear among political activists in the Lowveld during apartheid.

On day four, Mabuza’s case suffered yet another blow when judge Prinsloo ruled that the testimony of another of Mabuza’s witnesses, Marcia Khoza, be expunged from the court record (See story elsewhere in this publication).

This was after Maritz had successfully argued that Khoza’s testimony was prejudicial to the defendant, because it was not in the particulars of claim.

On the same day, Mabuza’s legal team decided that their client was not going to take a stand, hoping to capitalise on contradictions that might emanate from Phosa’s testimony.

Phosa’s legal team, however, was ready for anything the Labuschagne threw at them.

Labuschagne made two more efforts to prove that Phosa published the report by giving it to his business partner, and his secretary, but that too failed.

Labuschagne had to try to salvage something for his client, and asked Phosa about two incidents that are in the “spy report”, where his name is mentioned. Phosa denied that the two incidents took place, thus questioning the credibility of the entire spy document.

Judge Prinsloo will have to decide if Venter’s testimony is acceptable, and that he is a credible witness, of course after the closing arguments by both legal teams had been presented.

Mabuza should be partly relieved that at least two of the incidents in the document, through Phosa’s own admission during cross-examination, do not place him at the “crime scene”.

He may also succeed or even fail to get the R10 million from Phosa.

On the other hand Phosa should be grateful that he had a strong legal team, which did not take their eyes off the ball – i.e. to prove his innocence.

The fact of the matter is that it was not the content of the document that was the subject of the court case, but the publication, thus leaving the public with more questions than answers, as elaborated by Phosa during cross-examination’ “The document contains very serious allegations, which needs to be investigated. Families have got widows, children have no parents – they have been killed. This document talks about them. We need to know. Why should we not know?”

The case has undoubtedly opened a bigger wedge between the two former comrades, and it may take more than the judge’s wishes to mend the bridges.