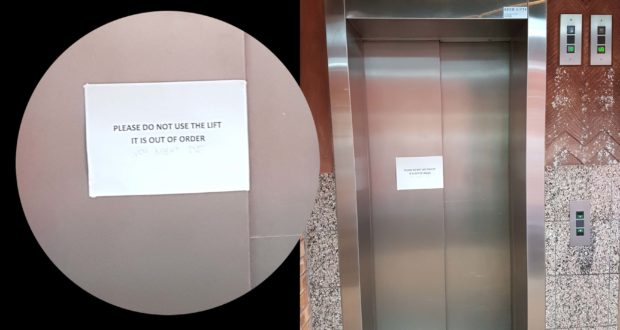 The Disabled People South Africa (DPSA) has reported the Mpumalanga provincial government to the South African Human Rights Commission (SAHRC) for a possible infringement of the rights of disabled people.

This, after the Mpumalanga provincial government reneged on its promise to fix broken lifts at the government complex at the Riverside Park in the city of Mbombela.

“The basic rights of the disabled people visiting and or working at almost all government building (are) violated, most of the lifts at the Mpumalanga provincial government offices at Nelspruit Riverside government complex are not working, this is the situation that has been prevailing for more than six months and by the look of things the lifts won’t be in operation soon,” said DPSA provincial secretary, Jabulani Sithole in his letter of complaint to the SAHRC.

On the 9th November 2016, the provincial government promised to fix all the lifts, but when the Ziwaphi team visited the Government complex on 1 February 2017, they were greeted by notices on the lift doors – one dating back to 18 August 2016.

“Kindly be informed that the department of public works, roads and transport is currently busy with repairs of all lifts at Riverside government complex. The department is still awaiting delivery of spare parts from manufacturers. Officials are requested to make use of staircases where lifts are non-functional. Kindly receive sincere apologies for the inconvenience caused,” reads a notice signed by public works, roads and transport (PWRT) head of department, Matthew Mohlasedi, addressed to “all staff at RGC”.

Disabled employees who cannot use the stairs have been the most affected. Some told Ziwaphi that no one has ever spoken to them about their plight.

Last year, the national chairperson of DBSA, who also works for the Mpumalanga provincial government said some of the disabled employees are left with no choice but to go back home since the problem started.

“Those who are forced to go back home the majority is out of their own accord,” said Masambo.

Of the eight government buildings, only two have working lifts, and in some of the buildings, including the premier’s office, the lifts have not been working since August 2016.

PWRT spokesperson, David Nkambule, said last November that the company which manufactured the lifts would fix them by December 2016.

“The Department of Public Works Roads and Transport is extremely concerned about the non functionality of some of the lifts at RGC. It is working tirelessly to find a lasting solution. To this end, it has terminated a contract it had with a service provider who was contracted for maintenance of lifts at River Side Government Complex (RGC) due to poor performance. The department has further decided to approach the manufacturer with the aim of expediting the process. The manufacturer has made commitment to do everything possible for the lifts to be operational by December 2016,” said Nkambule in November last year.

When Ziwaphi approached Nkambule last week to explain why the lifts were not fixed as promised, he requested written questions, which were sent to him, but still failed to respond and thereafter his phone went unanswered.

SAHRC national spokesperson, Gushwell Brooks, said that his organisation received complaints, which he described as infringement on the right to equality on the basis of disability.

The impact of the non-functioning of the lifts on the employees and clients of the provincial government who have to access the upper levels of the buildings is unknown, but the some users of the service seemed to vent their frustrations on one of the notices which are not on the official letterhead, where they altered the original message.

“Please Do Not Use The Lift – It Is Out Of Order, You Will Die,” reads the notice.