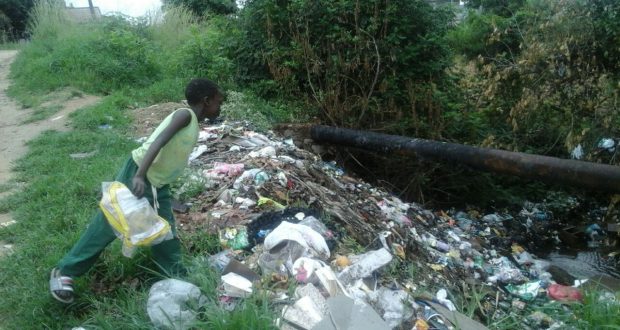 Children from Newscom going through an illegal dumping site to find food.

The community of Newscom is threatening a massive strike should the Mbombela Local Municipality not take care of an illegal dump site where starving children are eating rotten food every day.

“I always have to chase away children who enter the dumping site for the purpose of trying to find something to eat. I am afraid these children might catch some diseases there,” said one concerned resident, Nomcebo Khuzwayo.

The Newscom residents allege that people from neighbouring communities are throwing rubbish from households and garden waste over the small bridge. They say children are at greater risk as they have been seen eating food from the dumpsite when their parents are not around.

“When I feel hungry, I usually come here because I can find something to eat, and it is not like I do not have food at home but I follow my friends. We call this place our small free supermarket,“ said 7-year-old Makhosonke Zitha.

Khuzwayo continued: “As a community, we have been complaining about this issue but no one attended our complaint.” She said they have been calling the Mbombela Local Municipality for some time now but they are being sent from pillar to post.

“We burn the waste products and smoke affects the community for approximately two weeks or so,” said another resident Moses Ngubane. Ngubane also said that the residents are tired and now threatening to go on a massive strike should they hear nothing from Mbombela Local Municipality.

Mbombela Local Municipality spokesperson Joseph Ngala said the municipality was not aware of the problem: