The Secretary-General today met with Deputy President Cyril Ramaphosa, on the opening day of the AIDS2016 conference in Durban.

The Secretary-General commended South Africa for its progress in the fight against AIDS, particularly in giving access to treatment to people affected by HIV, recalling that the Durban Conference in 2000 had set very good guidelines to achieve such progress. However, he stressed that much remained to be done at the global level to ensure the ending of the epidemic by 2030.

Mr Ramaphosa expressed appreciation for the support lent by the United Nations, through leadership of the SG and UNAIDS in the fight against HIV and AIDS in South Africa and Globally. He expressed his best wishes to the UNSG for the remainder of his term of office.

The two leaders also discussed a number of regional issues. On South Sudan, they agreed on the importance of regional engagement to find a solution to the conflict. They also expressed their concern regarding the impact on civilians of recent incidents between security forces and the Renamo movement in Mozambique. On Lesotho, the Secretary-General appreciated the mediation efforts by the Southern African Development Community (SADC) and on Burundi, he reiterated the need for an inclusive political dialogue, thanking South Africa for its efforts in facilitating such a dialogue.

Noting the impact of the El Niño climate phenomenon on South Africa and the region, the Secretary-General hoped that the country would ratify the Paris Agreement on climate change by the end of this year to ensure its entry into force as soon as possible.

Mr. Ban Ki Moon is in Durban to officiate the opening the AIDS 2016 Conference running from July 18 to 22. The event will bring together national and international delegates including government officials. Civil society, for those working in the field of HIV, as well as persons living with HIV and other individuals committed to ending the pandemic. They will evaluate recent scientific developments and lessons learnt, and collectively chart a course forward.

Earlier in the day UN Chief gave a briefing on the High Level Panel on Access to Medicine mandated to provide valuable insights and contribute towards fresh ideas and solutions to pharmaceutical products. He thanked UN partners in the fight against the AIDS pandemic but said many people still cannot afford the new generation of treatments for AIDS, Hepatitis C and other non-communicable diseases like cancer. Mr Ban also met with leaders of civil society and had a dialogue with youth on health issues. To mark International Mandela Day the UN Secretary General took part in a tree planting ceremony in Midwood Garden, Durban, in honour of the late former South Africa president. 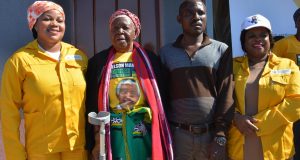