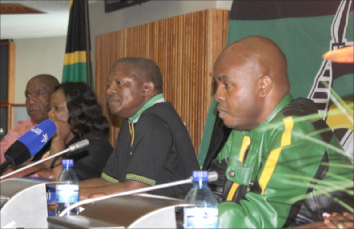 The South African Council of Churches (SACC) has warned the African National Congress (ANC) against using the same Biblical scriptures that apartheid presidents often quoted to defend racial discrimination and oppression in the past.
This follows a recent statement from the ANC in Mpumalanga calling for the SACC to allow President Jacob Zuma to remain State president until his term comes to an end in 2019.
The religious organisation recently added its voice to calls to “help Zuma resign” following the March 31 Constitutional Court ruling affirming the Economic Freedom Fighters (EFF) and Democratic Alliance’s (DA) position that Zuma “failed to uphold, defend and respect the Constitution.”
“Our men and women in collar should be the first to accept the apology, especially in line with Romans 13:1-7. They can’t sing from the hymn book of the opposition,” reads the statement that the ANC released during a recent press briefing in support of its leader.
The extract, from the Christian Bible, urges people to be submissive to the authorities irrespective of their conduct.
SACC acting general secretary, Bishop Malusi Mpumlwana, said the particular scripture used reminded him of apartheid days.
“The last I heard about this (Roman 13: 1-7) was from John Vorster and PW Botha. I would be very surprised if the ANC says that today. When we were justifying the campaign for the ANC for justice in our country, we were told by apartheid leaders that we should accept them because Romans Chapter 13 says we should,” said Mpumlwana.
The bishop said the SACC should not be accused of playing opposition politics.
“We did not publish the moral issues we raised with the President (and) they have nothing to do with the opposition. The fact is that an infringement of the Constitution has been caused by the very custodian of the Constitution. They do not need the opposition to tell the ANC; in fact the ANC should be taking a lead, not the opposition. It is surprising that they leave such an important matter to the opposition,” said Mpumlwana.
When faced with a legitimacy crisis in the mid 1980s, then president, PW Botha, also resorted to Romans 13.
“The Bible … has a message for the governments and the governed of the world. Thus we read in Romans 13 that every person be subject to the governing authorities. There is no authority except from God. Rulers are not a terror to good conduct, but to bad conduct. Do what is good and you will receive the approval of the ruler. He is God’s servant for your good,” said the late apartheid president, addressing the Zion Christian Church during the church’s annual Easter pilgrimage in 1985.
Mpumalanga premier, David Mabuza, who is also the provincial chairperson of the ANC, said if Zuma has no money to pay, he can ask for money from the ANC in Mpumalanga province.
“He is the president of the ANC, and if he doesn’t have money to pay, probably he can request members of the ANC to help him pay. The branches of the ANC are led, these are not lose branches and the leadership of the ANC will at all times provide leadership,” he said.
In 2009, former ANC Youth League leader, James Nkambule, accused Mabuza of having paid R400 000 towards Zuma’s wedding for one of his wives in order to secure the premiership of Mpumalanga province. Both Mabuza and Zuma never denied the allegations.
The South African Council of Churches’ acting general secretary, Bishop Malusi Mpumlwana, failed to respond to written questions.

2016-04-23
Tom Nkosi
Previous: “My ears are intact,” says councillor
Next: Nathi and Monde coming to Mpumalanga