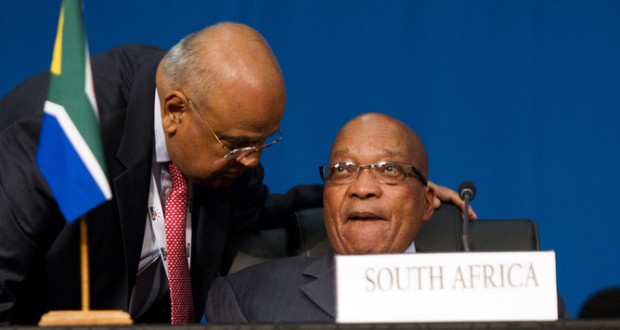 It was the battle between South Africa’s traditionalist president and its modernist finance minister that arguably led to the latter’s sacking late last year.

Former Minister of Finance Nhlanhla Nene had focussed on governance in State Owned Enterprises and capital projects that were unaffordable for the country’s economy. That was in the midst of declining mining and manufacturing sectors and a drought stricken agricultural sector.

It has been argued that these actions could have irked President Jacob Zuma, leading to  Nene’s ousting on 9 December 2015. A younger “clever” and modern young black man had challenged an “elder” in the form of Zuma, which is traditionally unacceptable in the Zulu culture. The events following that evening have been well documented.

Nene understood that the increases in revenue collection were not sustainable. It is therefore not surprising that his equally modernist successor Pravin Gordhan indicated in his 2016 budget speech that revenue collection of 30.2% of GDP would be less than expenditure resulting in a deficit of 3.2% in 2016/17.

In last year’s Medium Term Budget Policy Statement released in October, Nene hinted at fiscal consolidation by having a debt to GDP ratio ceiling of 46.2% and a deficit of less than 3% as a percentage of GDP in the third year (2018/19) of the medium term budget. Gordhan has decreased that more aggressively to 2.8 by 2018/19 budget by reprioritising expenditure and cutting costs.

When Gordhan was reappointed into the finance portfolio, he reportedly presented a list of demands. It included autonomy in decision-making in pursuit of financial and fiscal discipline to restore South Africa’s credibility as an investment destination. However the President’s utterances in recent days indicate simmering tensions in the relationship. Zuma was quoted as saying:

Van Rooyen is my comrade, MK (Umkhonto Wesizwe) for that matter – where I come from. He is a trained finance and economic comrade, more qualified than any minister I have ever appointed there, in the finance issue.

Zuma, “the traditionalist”, is struggling with the modernity of global capital. Its flow and velocity, the ability to discipline irrationality despite the fact that financial markets have irrational over-exuberance embedded in them, bugs him.

It could be argued that Zuma’s stomach is turning at the concessions he made in appointing Gordhan in December. His utterance could be a tactic. He could be signalling to the public that he is in charge despite his recent political setbacks of backtracking on the appointment of Van Rooyen and his willingness to pay back part of the money spent on his Nkandla home. To support this argument Zuma announced salary increases for all public office bearers ahead of the budget.

Wednesday was Gordhan’s day. However, Zuma’s actions showed “who is the boss”. Thus by exercising power, the president was keeping his patrons happy. Yet he missed an opportunity to signal to the international investor community that he was in support of the consolidation efforts of his minister of finance.

In the past month and in the 2016 budget Gordhan has emphasised the importance of social partners such as business, labour and community. He stressed he was also encouraged by provincial efforts such as Ntirhisano in Gauteng.

Unlike in the Mandela/Liebenberg, Mbeki/Manuel, and arguably initially the Zuma/Nene partnerships, the current Zuma/Gordhan relationship has gaping cracks. It asks more questions than it provides answers. A signal of a solid relationship was needed in the 2016 budget presentation to win over sceptical credit rating agencies that the budget consolidation of debt, financial and fiscal disciple will be sustained.

The modern Gordhan, understanding the mistrust particularly by the electorate and various other stakeholders, has sought to enter into a social contract with all stakeholders. Of interest is that such a social contract had defined the Mbeki leadership while being detested by a lot of the ANC allies as a neo-liberal paradigm. They saw it as one that promoted capitalist accumulation at the expense of workers and community. This was despite that fact that Mbeki’s leadership extended social security to the vulnerable people, the poor, elderly and young mothers.

The modern Gordhan listened to big business and sought the advice of premiers. Some of the latter highlighted the need to re-establish trust with communities, particularly in Gauteng where e-tolls are detested. He was also warned that in certain areas the anger by the electorate could cost the governing African National Congress some metropolitan and key municipal areas in the forthcoming local government elections.

In his budget Gordhan not only provided tax relief while taking away more in the form of fuel levy and sin taxes. His masterstroke was in the form of addressing higher education financing to defuse protests whilst ensuring that universities’ financial position is not burdened.

Since 1991 the National Student Financial Aid Scheme has assisted 1,5 million students from poor backgrounds amounting to R50 billion. For the 2016/17 to 18/19 about R32 billion is budgeted of which R8 billion will support poor students enrolled and the new cohorts in the following years.

This was made possible by reprioritising expenditure. All in all R93 billion is allocated to higher education. A long sustainable funding solution of tertiary education is required to strengthen skills knowledge and innovation which are critical pillars of a competitive dynamic economy.

Not increasing personal income tax and providing support to students indicates that government is listening and responding to the urgent needs of the day. Mass protest in the form of #Feesmustfall, threats of abstaining from the voting booths by the ANC alliance members – the Congress of South African Trade Unions and the Communist Party – and mistrust of government in some provinces have all shaken the ANC government.

Tax relief and higher education support is welcome. But it could also reinforce the view that for delivery to take place in South Africa, mass action remains a strong weapon as it yields results. However, the response by government in the budget could also be a populist ploy to win votes in the local government elections. Populism is not sustainable in the medium to long term as experiences in Latin America have shown.

Importantly, the ANC government can do well by closing the cracks between the president and the finance minister. It appears though this is unlikely to happen. Therefore one of them will fall – one’s demise will lead to strengthening of the currency and the restoration of confidence. The other’s could fasten the country’s status to junk. No need to guess who that is.