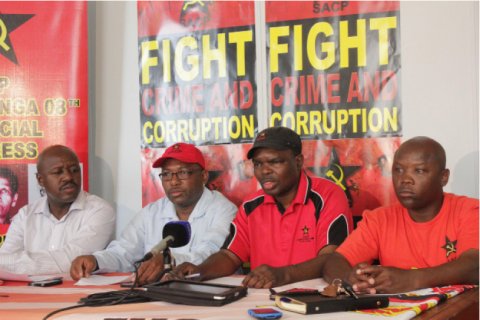 People’s choice: The SACP has encouraged communities to resist imposed councillors and instead elect their own councillors

The South African Communist Party (SACP) in Mpumalanga has threatened to withdraw its support of ANC councillors – should they be imposed on communities ahead of the 2016 local government elections.

“No councillors are going to be imposed on the people, and the people are going to make sure that they elect their own councillors… The South African Communist Party is going to support someone popular with the community. We don’t care whether that person is an independent (candidate),” said Majuba.

This latest hardline stance follows allegations of imposition of councillors by leaders of the ANC at Ehlanzeni region, particularly in the Nkomazi local municipality.

“As communists, we go with the wishes of the people. We will not go with imposed [councillors], that’s what we are saying as the (SA) communist party,” said Majuba.

While it is unprecedented for the ANC’s alliance partners to openly declare that they would support independent candidates who will be contesting against the ANC, the governing party has downplayed the allegations of imposition of councillors.

ANC provincial spokesperson Sibusiso Themba said that his organisation is on record that the communities will be allowed to choose their own candidates.

The ANC spokesperson, however, changed his tone when asked to react to the SACP’s pronouncement that the party was going to support independent candidates.

“It’s their choice, there’s nothing we can do about that,” said Themba.

The SACP’s latest stance follows shortly after the ANC in the province has just suffered high profile defections to the Economic Freedom Fighters (EFF) party.

The tensions between the two parties reached a boiling point in January last year when members of the ANC laid a bloody siege at Kanyamazane community hall to prevent a memorial lecture in honour of Slovo and Mohlala.

Mohlala was killed at his home in January 2009, after he blew the whistle on corruption linked to the construction of the Mbombela stadium in preparation for the 2010 FIFA World Cup.

ANC provincial chairman David Mabuza and his supporters were unhappy that ANC former treasurer-general Mathews Phosa was the scheduled to present the memorial lecture.

Mabuza later denied allegations that he ordered the attacks on SACP members, but questioned what he called an “alliance” between the SACP and Phosa.

2016-02-15
Tom
Previous: Govt finally tackles ‘road of death’ after 10 years
Next: Mpumalanga writer’s play to be showcased in LA