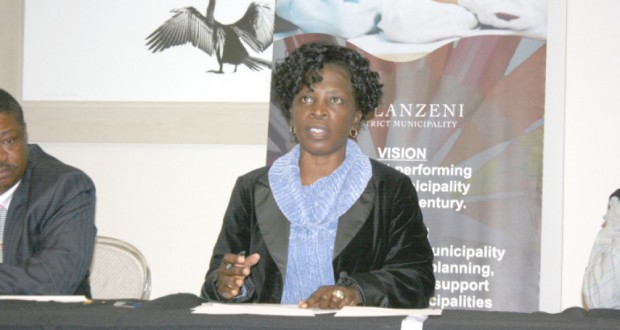 Mpumalanga’s former executive mayor at the Ehlanzeni district, Khosi Mkhonto, has joined the Economic Freedom Fighters (EFF) after being frustrated as an ANC member.

Mkhonto served as mayor of the district, which consists of Mbombela, Mashishing (formerly Lydenburg), Malelane and Barberton, from 2006 to 2011.

“The EFF has been recruiting me since 2013. I finally made my decision in December last year that I would join them. They have promised to

create space for me to continue with politics,” she said.

Mkhonto said when her term expired in 2011 she decide to look after her children and grandchildren.

She said since then the ANC has never bothered to use her leadership skills even though they knew she was politically motivated.

“That made me to realise I had to look for a party that would create space for me. I chose the EFF because they never gave up on me. They have kept on recruiting me and I knew they would use me. I’m politically bold and I am also a very hard worker,” said Mkhonto.

Mkhonto followed on the footsteps of former Mbombela mayor Isaiah Khoza, who served as Mbombela local municipality mayor between 1995

and 2004, before becoming head of the provincial department of community safety, security and liaison, joined the EFF in September last year.

Khoza was the second top ANC politician to join the EFF last year, after the former member of the National Assembly Tseko Taabe’s defection.

Taabe accused ANC provincial chairperson David Mabuza of acting like Burundi’s President Pierre Nkurunziza, who has been in power since 2005.

Another ANC member and veteran and former provincial secretary and a national executive committee member in the early 1990s, Joe Nkuna joined the EFF in 2013.

ANC provincial spokesperson Sibusiso Themba said Mkhonto’s joining of the EFF had nothing to do with the ANC.

“There is nothing I can say except that I wish her all the best in her new party,” said Themba.

“We welcome her and every member joining the EFF, regardless of their previous political affiliation or positions. Our main goal is to have as many members as we can. Mkhonto’s experience and capacity will empower future EFF councillors to work well. We have many others like her who are still in the ANC, but are not brave enough to step forward. They will soon join us,” said Sedibe.

Written by: Ziwaphi on 29th Jan 2016.on 11th Feb 2016.
2016-01-29
Ziwaphi
Previous: A critique to an article, ‘the ANC that Lucky Ndinisa created’
Next: Phosa reinstates criminal charges against Venter