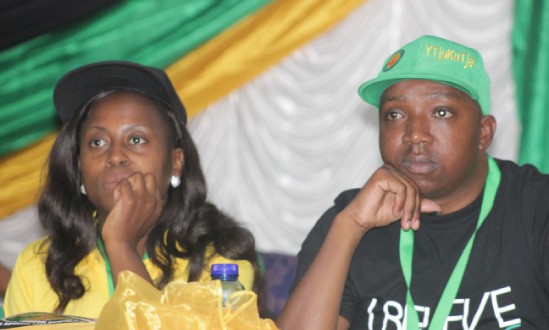 MECS IN WAITING? ANCYL leaders, Sasekani Manzini and Desmond Moela are expected to get MEC positions.

Now that David Mabuza has been elected unopposed for a third term as chairman of the ANC in Mpumalanga, the party’s youth league is renewing calls that he get rid of five MECs.

ANCYL national deputy president Desmond Moela, who also chairs the youth league in the province, told African Eye News Service this week that the party’s Provincial Executive Council had yet to respond to the young lions’ call that #MECsmustfall.

“We have made our call as ANCYL that this reshuffling, he does now or later, but we believe strongly that the Premier is a good listener. He has never failed the youth league before. He never fails us,” said Moela.

The ANCYL has accused the MECs of doing as they pleased when Mabuza was booked off sick for nearly three months after collapsing, apparently from fatigue, in early September.

Mabuza returned to work on November 17 and was re-elected, unopposed, as the party’s chairman, this past weekend.

“If the Premier has a challenge, he will address us, telling us that ‘I am not going to do this now, I will do it in a specific time’. Our wish was that the reshuffling must be between now and January,” Moela said.

Spokesman in the Premier’s Office, Zibonele Mncwango, was not aware of any imminent cabinet reshuffle.

“The issue of reshuffling cabinet is the prerogative of the Premier. He does not tell us. We see it when it happens. In other words, I am trying to say the premier has not said anything at this stage about reshuffling,” said Mncwango on Tuesday.

ANCYL spokesman Vusi Mkhatshwa has previously told African Eye News Service that Moela and youth league secretary Sasekani Manzini should be sworn in as members of the provincial legislature.

“We are pushing for the 40 percent youth representation and we trying to make sure that it is achieved,” said Mkhatshwa.

During the 2014 general elections the ANC in the province lost three legislature seats, two to the Economic Freedom Fighters (EFF) and one to the Bushbuckridge Residents Association (BRA).

2015-12-23
Nkosinathi Sengwayo
Previous: The Year In Review
Next: The ANC that Lucky Ndinisa created