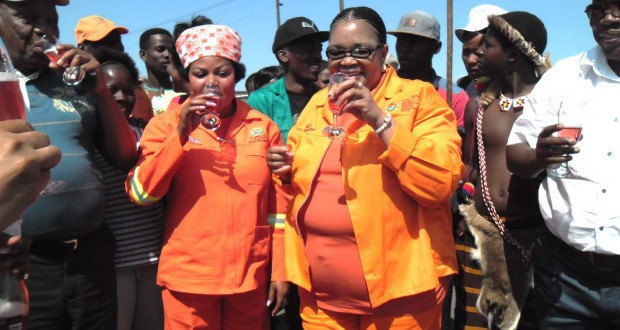 Rural community members living near the Swazi and Mozambican border in Mpumalanga have been warned against damaging a newly unveiled R147 million road during future service delivery protests.

The appeal came from provincial public works, roads and transport MEC Dumisile Nhlengethwa during the official handover of the 13km D797 Road between Tonga and Sibayeni villages near Komatipoort on Friday.

“This road is worth close to R148m and it has to last more than 20 years before being serviced. I don’t want to hear any bad news that you have vandalised it because you want water… We know your needs, especially water, and roads. We as the department have budgeted R2,2b for the whole province to fix and build usable roads,” she said,” said Nhlengethwa.

She said the construction of the road created job for 67 people and 16 subcontractors.

“Local community members gain skills that they will use in future, and they were paid R1,7m in total while the contractors were paid R14,5m,” Nhlengethwa said.

As part of Transport Month, Nhlengethwa warned parents not to pay money to transport owners who operate vehicles that are not road worthy.

“I have personally impounded four buses which were carrying school kids in this area,” she said.

Buscor representative, Skhumbuzo Nkuna, told African Eye News Service that the company is happy that the roads are being fixed.

“MEC, when our roads are in a good condition it is very rare that our buses can be involved in any accidents. So, in this way we are very much happy to be part of this hardworking department,” he said.

“You are doing a good job to build these roads so that we can drive safely. Indeed MEC Nhlengethwa you have delivered this time around. We appreciate it as an association,” Matola said.