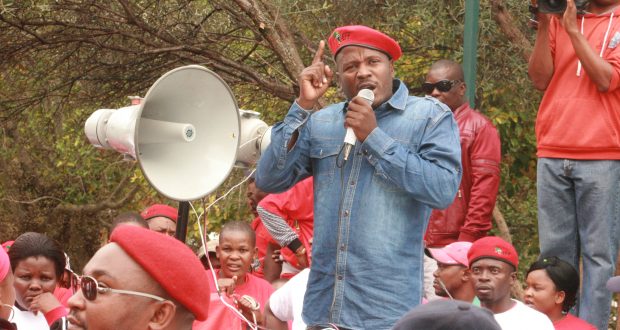 MARCHING ABOUT: Economic Freedom Fighters secretary in Mpumalanga Alfred Skhosana speaks during a march in Mbombela.

The office of Mpumalanga Premier David “DD” Mabuza has denied the Economic Freedom Fighters’ (EFF) public statements that the premier is using civil servants and political leaders, including President Jacob Zuma, as his political zombies.

EFF provincial secretary Alfred Skhosana fired the salvo at Mabuza during a peaceful protest in which hundreds of the party’s supporters recently marched to the Mbombela local municipality to deliver a memorandum against corruption.

“It appears as if the political party you are referring to is extremely bored and is desperately seeking some media publicity by tarnishing the image of the Honourable Premier David Mabuza. The Honourable Premier has got no time to talk about zombies,” Mabuza’s spokesman Zibonele Mncwango told African Eye News Service (AENS) on Tuesday.

Mncwango insisted that Mabuza’s heart was on the development of Mpumalanga province.

“Issues of unemployment and unskilled youth stress him a lot; it is in this regard that he has undertaken to go all out to seek foreign investment in order to create jobs,” said Mncwango.

During the march, Skhosana told civil servants and police officers that they were all being paid to take good care of Mabuza.

“The corruption for the past 20 years in this municipality has led to the people working here to be zombies of DD Mabuza where if you are not a member of the ANC following his orders you cannot work here. All of you here are zombies of DD; he directs you on how to steal money to fund his third term campaign and his pocket.

“Those who try to expose him are either killed or persecuted in many ways or just lose their job. We know how Jimmy Mohlala who tried to expose corruption in this municipality was killed. This man (Mabuza) has even turned the Hawks into his zombies; they too are under his pocket. He has even corrupted Jacob Zuma who now cannot act against him,” said Skhosana.

Provincial party leader Collen Sedibe demanded that the municipality provide them with the list of all general workers employed since April this year and all records of interviews held.

“We also want the appointments of general workers who were appointed during the Easter Weekend to be reversed as per the court order given to the municipality by the sheriff of the court. Scrap the water tank services and replace it with tap water as water tanks promote corruption,” said Sedibe, reading the memorandum to Mbombela executive mayor Sibusiso Mathonsi.

Mathonsi, who received the memorandum, said: “Most of the things in the memorandum are allegations which will need us to investigate. We are going to do so and come back to them. About the issue of us being zombies it is all lies and we also want to make it clear that we are a municipality run by laws and such things they allege are not there. If there’s crime happening do approach the police,” said Mathonsi.

“This is a fallacy by disgruntled members of EFF. We work with integrity, not directed by anyone and not paid from someone’s pocket. If they believe they have information on our members being used we are open in our offices to report such. But it should be clear that we reject these allegations,” said Mulaudzi.