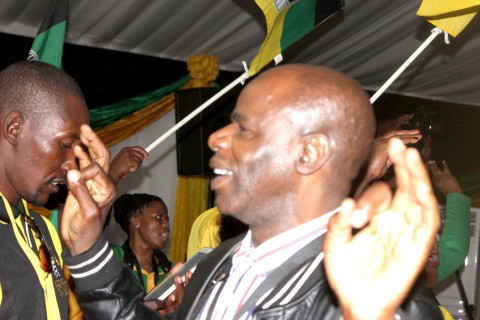 THIRD TERM ALREADY SECURED? Followers of Mpumalanga premier, David Mabuza showing their loyalty by dancing in front of him during the recent provincial general council.

First National Bank is refusing to answer media enquiries regarding a teller who has been appending the bank’s official stamps on blank ANC membership forms, which are believed to be used in manipulating the ANC’s membership system.

The teller may be the only key to unravel how African National Congress conferences are manipulated in Mpumalanga province to keep Mpumalanga premier, David Mabuza in power.

A recent, non-elective provincial general council, took a resolution that Mabuza must be elected unopposed at the organisation’s provincial elective conference later this year, but before the PGC, some leaders of the ANC launched a Save Mpumalanga ANC campaign to fight the rigging of ANC conferences in the province.

An investigation by this newspaper may have, for the first time, uncovered how leaders of the ruling party have been colluding with the bank teller in Limpopo province to manipulate the ANC’s membership system in Mpumalanga.

According to documents seen by this reporter, cash for membership for a branch in Emalahleni was deposited at an FNB branch in Groblersdal, which is in Limpopo province.

In two of the forms seen by this reporter, the bank teller appended an official bank stamp, dated 5 August 2014, on a blank ANC Form and cash deposit slip, which means that whoever is recruited after that date, shall be deemed to have joined the organisation as back as August 2014.

The evidence was so damning that for the first time, the provincial secretary of the ANC in Mpumalanga admitted that such fraudulent activities and manipulation of the ANC membership system was a problem for the organisation.

Ndinisa also admitted that he would not have been aware if such activities have been happening, had this newspaper not confronted him with the evidence.

“This is a serious problem for the ANC. From where I’m sitting, had it not been (for) you (media), I wouldn’t know about it,” said Ndinisa.

He said that the introduction of such members into the ANC would be unfortunate because it would have happened in an abnormal way and promised to investigate.

“We will look into this, we will investigate. We will make sure that these culprits, whoever they are, they are brought to book,” he said.

Leaders of the ANC in Mpumalanga province have in recent years been accused of “stealing” conferences through the manipulation of electoral processes by accrediting bogus delegates and branches to conferences.

Ndinisa, however, has ruled out the possibility of a full-scale investigation, but will rely on cases that are brought to their attention.

He said that there would be two investigations, one by the provincial leadership and the other by the accused region.

“We will not take it as a general norm and standard that is happening in the province. We want to treat each case as it comes to our attention. However, because we are saying we will investigate, we will engage the regional leadership of the ANC to further investigate themselves,” he said.

Notwithstanding that the evidence points to fraud, Ndinisa said that the organisation would not be involving law enforcement agencies.

“We can’t certainly say (that) we will involve the police because as the ANC we strongly believe that we will resolve everything and anything internally before we can go externally,” said Ndinisa.

The leader of the Save Mpumalanga ANC campaign, Sipho Monareng, told this newspaper that this incident is not something that is new, but is an established practice within the ANC in the province.

“I was not aware of this incident, but it’s something that we have long been saying that they (Mpumalanga ANC leaders) are criminals who are embarking on fraudulently (manipulating) processes of the ANC for their selfish interests. We will follow this matter up, with our comrades who have raised a number of complaints about these fraudulent activities and ultimately take it to the secretary general,” said Monareng.

“If the information you are giving us is true and the information that we already have to prove that they had a bogus PGC, it confirms our allegations that they want to fraudulently get into power at all costs without using the processes of the ANC as it is in the constitution,” he said.

He also said that the problem is that the modus operandi is that the perpetrators of the fraud are expected to investigate themselves.

“Those who are engaged in these fraudulent activities are given an opportunity to hide any evidence when asked to investigate themselves. That is why we go to the media, because we have exhausted all the so-called internal processes,” he said.

He quoted the incident of Nkangala where 11 branches of the ANC had failed the audit from the ANC’s head office by having less than 100 members as required by the ANC constitution.

According to the campaign’s Nkangala regional representative, when the regional conference finally sat, however, the eleven branches had more than 200 members and had more delegates at the conference than the branches that had legitimately passed the audit.

“The question is who audited those branches after they had failed the national audit? We have been to Luthuli House to see the SG (Mantashe) four times, but up to now he is quiet,” said the representative of the Save Mpumalanga ANC campaign in Nkangala.

He said the ANC has adopted a constitution that commits itself to a culture and practice of democracy, and that it was wrong to disregard the constitution when it suits the leaders.

“The secretary is the custodian of the ANC constitution, he must protect that constitution. We elect councilors and even the president through ANC processes. Our democracy in the country depends on these processes. If we flout these processes in our organisation, then we can’t claim to have a democratically elected president,” he said.

Meanwhile the FNB head office refused to answer any questions, quoting the confidentiality between their customer, the ANC and the bank.

The bank also refused to admit or deny if the teller, whose reference number this newspaper has, is their employee.

“Thank you for the enquiry below. Unfortunately FNB cannot reply as the questions relate to confidential matters between the bank and a customer.

“We cannot disclose the identity of employees or our management processes relating to employees. Please be assured the matters you have raised have been escalated to our executives to ensure compliance with branch processes,” reads an unsigned statement from FNB.

The bank also failed to disclose how long the employee had been working for the bank and how long he had been involved in what clearly encourages fraud.

FNB also failed to respond to questions which were not related to their customer, in particular if they would be conducting any internal investigation or whether it is the bank’s policy to append an official bank stamp on a blank cash deposit slip.

Monareng said he is not surprised by the attitude of the FNB. He said that their failure to take any action was expected because capital thrives on fraud.

“Capital is benefiting from any fraud, so we are not surprised. As long as they get money (and) maximise profit, they don’t care what happens to the plight of the ordinary people,” said Monareng.

At the time of going to press the office of Gwede Mantashe was not available for comment.