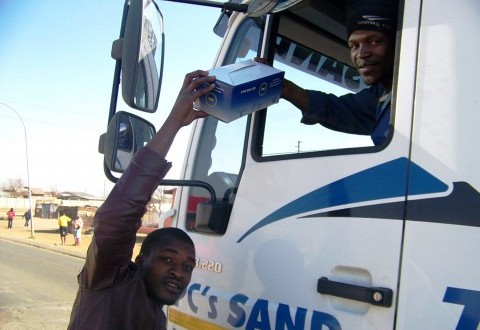 Inside South Africa’s HIV and AIDS capital Gert Sibande District
Having a job is meant to improve poorer people's livelihoods, but a dash through Mpumalanga's Gert Sibande district tells a different story. The district, whose key economic activities include mining, agriculture and forestry, is characterized by high levels of seasonal and migrant workers - and has been classified a district with the highest HIV prevalence in South Africa. According to the latest Antenatal Sentinel HIV and Syphilis Prevalence Survey, Mpumalanga HIV prevalence increased from 35.1% in 2010 to 36.7% in 2011, second to KwaZulu Natal. “However the provincial epidemic curve has picked up drastically as trends explained in the three&hellip;

Having a job is meant to improve poorer people’s livelihoods, but a dash through Mpumalanga’s Gert Sibande district tells a different story.

The district, whose key economic activities include mining, agriculture and forestry, is characterized by high levels of seasonal and migrant workers – and has been classified a district with the highest HIV prevalence in South Africa.

According to the latest Antenatal Sentinel HIV and Syphilis Prevalence Survey, Mpumalanga HIV prevalence increased from 35.1% in 2010 to 36.7% in 2011, second to KwaZulu Natal.

Dr Eric Khumalo, a TB and HIV expert based in the capital city, links the HIV prevalence with sex work.

“The existence of the national N17 and other roads connecting Gert Sibande district to other districts and provinces, creates an opportunity for commercial sex work between unemployed women and long distance truck drivers.

“This challenge, coupled with the province’s under budgeting and slow implementation of the Mpumalanga Provincial Aids Council (MPAC), is fuelling the high HIV prevalence in that district and the province at large,” says Khumalo.

“Unemployment in Gert Sibande district, which currently stands at over 39% and poverty coupled by low literacy levels, creates an imbalanced relationship between family members and couples leaving women with no voice in relationship matters including sexual relations. This also contributes to HIV infections,” Khumalo said.

He said lack of co-operation from government, the community, civil society, private and public doctors, is also a secondary contributing factor to HIV in that district.

“The approach needs to be multi-sectoral. Government, the non-profit organisations, doctors from all sectors and the public needs to get involved and work together and act against the identified contributing factors to HIV, not only in Gert Sibande, but the whole country,” he said.

According to an on going study done by the University of California, San Francisco (UCSF) and the Anova Health Institute on gay and bisexual men in Mpumalanga, 30% of the participants in Gert Sibande – and 16% in Ehlanzeni district – were HIV positive.

“New HIV infections were also on the rise. In Gert Sibande, 22% of participants who reported testing HIV-negative in 2012, tested HIV-positive in the study in 2013. In Ehlanzeni, the figure was 17%. The study begun in 2012 and is on-going,” Helen Struthers of Anova Health Institute says.

Dr. Tim Lane of UCSF, the study’s principal investigator, said the study further showed that men did not test regularly, with only 1 in 5 reported doing so regularly every six months.

“These findings demonstrate that men who have sex with men in Mpumalanga are not utilising available HIV services in proportion to their need,” Dr Lane says.

He said the stigma faced by gay men in the public health care sector may be partially at fault. “Almost everyone knows where to find a nearby clinic that offers testing and treatment. But choosing a clinic where you will not experience stigma for being a gay or bisexual man is a more difficult task. Many just avoid testing for as long as they can,” Lane explains.

MPAC chairman and Premier of Mpumalanga, David Mabuza, said the province needed to increase the council’s budget to win the fight against HIV.

“Currently the province is the second worst hit after KwaZulu-Natal in terms of HIV statistics, with Gert Sibande district having the most infections at 46%. The municipality’s R1.3 million budget to deal with the disease is not enough.

“If you want to fight this kind of battle, you must arm yourself by having dedicated programmes that you must carry out. In order for you to achieve on those programmes, you need reasonable resources to systematically go all out and attack this scourge,” said Mabuza.

He said an increased budget would enable local Aids councils to be able to do their work properly, including mobilising communities to take responsibility on HIV and Aids matters. These include not engaging in unsafe sex, knowing their status and giving support to those who are infected and affected by the virus.

When Mpumalanga Provincial Aids Council launched in 2012, they identified the following priorities to be implemented between 2012 and 2016:

* Increase HIV awareness throughout all sectors, especially high risk populations such as the youth, farmworkers, etc.

* Intensify case finding and follow up through screening for HIV and AIDS, STIs and TB.

* Maintenance and sustenance of health and wellness of all citizens.

* Promote the core values of the SA constitution to mitigate stigma discrimination and related behaviours.

“All the districts, local and provincial Aids councils are active and we hope to see changes when the 2014 Antenatal Sentinel HIV and Syphilis Prevalence Survey is released late this year,” said Mabuza spokesman Zibonele Mncwango.

According to Statistics South Africa (Stats SA), the country’s population was more than 52 million in 2013, and 5.26 million of those were living with HIV. Provinces that recorded the highest HIV prevalence were KwaZulu-Natal (37.4%), Mpumalanga (36.7%), Free State (32.5%) and North West (30.2%). The Northern Cape and Western Cape recorded the lowest prevalence at 17.0% and 18.2%, respectively.