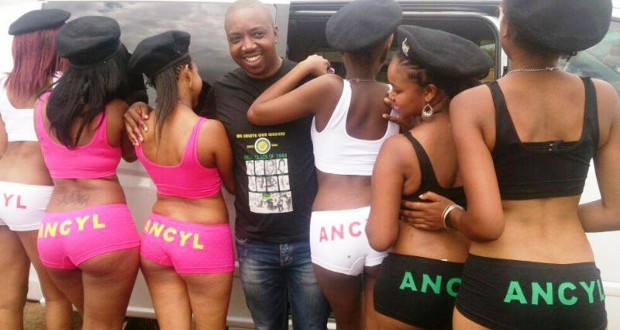 The pictures, which resemble an American hip hop CD cover, show the women wearing underwear bearing the acronym “ANCYL” while a smiling Moela looks on.

“You must know that the ANC Youth League is a preparatory school for the ANC. So, sometimes young people, as they are energetic, become creative and do things that sound and look weird in the public,” said provincial ANC secretary, Lucky Ndinisa, on Monday. “So, we are going to talk to them regarding this and tell them what’s the right thing to do. However, we do not condone or allow such (behaviour). But they are learning.”

Attempts to speak to Moela were unfruitful as his phone was answered by a person who said the chairman would remain in meetings the whole day.

“The chairperson found the girls wearing the underwear. Who is he to decide what they should wear? He found them like that and educated them about the elections telling them to vote for the ANC.

“Really, those girls have a right to wear what they like and we cannot stop them and that’s how creative they are. Even though it was ANC Youth League branded, it was not paid for or given by the league,” said Manzini, before hanging up the phone.

Elections campaign coordinator of the Economic Freedom Fighters, Collen Sedibe, labelled Moela’s action as that of an “immature king”.

“That boy was not elected but thrown into the position of a king by the premier of Mpumalanga (David Mabuza). It shows the level of maturity within him,” said Sedibe. “How can a chairperson of the youth league undermine the rights of the women in the province that they must be naked? How can you do that as a leader? He is now like Kenny Kunene when he used to eat Sushi off naked women.”