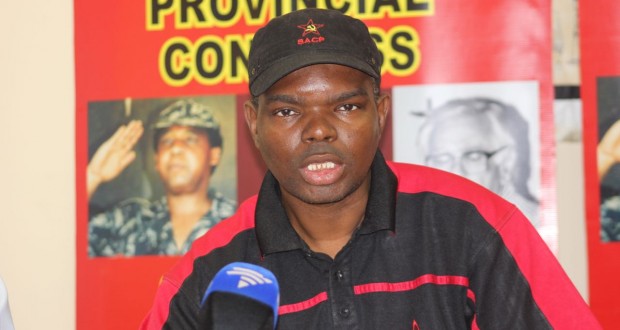 SACP provincial secretary, Bonakele Majuba. The ANCYL wants him removed from the Legislature.

The ANC Youth League in Mpumalanga has called on its mother body to immediately remove the party’s deputy chief whip in the provincial legislature, accusing him of being a danger to the party.

The call came after Bonakele Majuba, who is also the provincial secretary of the South African Communist Party (SACP), released a statement on Tuesday asking premier David Mabuza to resign because he was responsible for causing factionalism in the province.

Majuba also accused Mabuza of failing to consult the ANC’s alliance partners, including the SACP and the Congress of South African Trade Unions (Cosatu), about his executive committee reshuffle that took place last week.

“It was the opposition Democratic Alliance that first made a call for the premier to resign, so it means Majuba is in cahoots with the opposition and therefore the ANC is no longer safe with him,” said Ronald Lamola, youth league spokesman in Mpumalanga.

“We cannot have a deputy chief whip who is working against the premier and the ANC.”

Lamola accused the SACP of conducting a campaign to discredit Mabuza.

“The SACP has always insinuated that the premier was corrupt and behind the political killings in the province. Despite making these wild allegations against the premier, the SACP has never came forward with any evidence to shed light on these wild and unbelievable stories,” added Lamola.

He also accused Majuba of being a “bitter soul” who was angry at Mabuza for not getting an MEC appointment in the reshuffle.

“It is an open secret that Majuba has an undying desire of becoming an MEC. All members of the ANC and the alliance partners are free to have this ambition, but they must wait for their time to come. It changes from being an ambition to an obsession with power when you become angry because you were not appointed,” he said.

ANC provincial secretary Lucky Ndinisa confirmed that Mabuza had not consulted the party’s alliance partners about the reshuffle but said they had been briefed.

“Each component of the alliance enjoys political independence from one another, and it is the prerogative of the premier to appoint and release members of his (executive committee),” said Ndinisa.