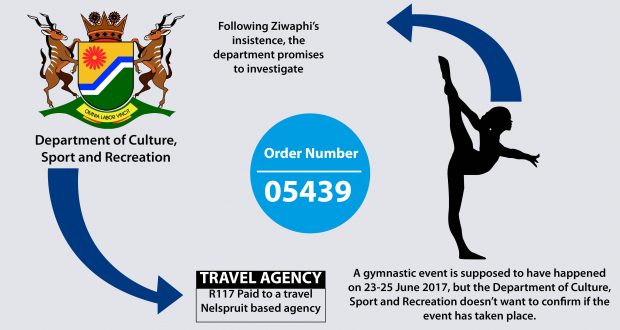 Mpumalanga government’s department of culture, sports and recreation has remained mum on an enquiry regarding an order that it issued and payment was made.

According to whistle blowers within the department, a payment of R117 000 was paid to a Nelspruit based travel agency for “gymnastics” which took place on 23-25 June 2017.

The department neither denied nor confirmed that it had issued Order Number 05439, following an enquiry sent to them on 5 September 2017.

According to the sources, an official in the department, whose name is known to Ziwaphi, is colluding with the travel agency by concocting bogus “events” and issues orders which are then paid for by the department.

The sources also informed that department’s disgraced former head, Walter Mnisi, was aware of the activities of the official.

“When the incident was brought to his attention, he did not take any action against the official, but merely shifted another junior official to the archives building. The main culprit is still continuing with such activities in the department,” said the source who cannot be named for fear of victimisation.

Ziwaphi asked the department to confirm if any school gymnastics did take place in Emalahleni, that they provide the venue of the event, the number of participants and the names of the departmental officials who witnessed the event and the circumstances surrounding the removal of the one official who was placed at the archives building.

Departmental spokesperson, Sibongile Nkosi, however, failed to respond directly to the questions. She instead sent a one line response.

“The allegations are viewed in a serious light. The Department does not condone corruption and subscribes to good governance and accountability. In this regard, we will institute an enquiry into the matter.”

The travel agency, whose name is known to Ziwaphi, could not be reached for comment at the time of publishing.

According to the Auditor-General’s report for 2015/16 and 2016/17 financial years, the department received a qualified report with findings.

Mnisi disgracefully resigned in July 2017 after the head department for provincial treasury, Nombedesho Nkamba declined his request for the condonation of an irregular expenditure of more than R5 million to a company called Fruga Code in addition to the original tender amount of R4,9 million.

The payment was for the installation of Radio Frequency Identification (RFID) system in all Mpumalanga libraries.

The department has previously defended Mnisi’s action, even though they could not prove that the service was rendered.

Mnisi has since been replaced by an acting director, Godfrey Ntombela.

Democratic Alliance, spokesperson for the department of culture, sports and recreation, Jane Sithole, said that the AG’s report which shows unauthorised expenditure of R1 million was just a tip of the iceberg.

“Once the Annual reports for the 2016/17 financial year are finally released, the DA has no doubt that the issues identified by the AG in the previous year’s audits, will be issues raised once again,” said Sithole.

She noted that during the 2015/16 financial year, the department had the recorded R51,8 million in irregular expenditure, R9,16 million in fruitless and wasteful expenditure and R7,6 million in unauthorised expenditure.

“The presence of corruption in the department is not simply an allegation, but is a fact. The numbers above don’t lie, and you can be rest assured that the figures above will definitely increase should the department continue to fail to investigate the above corrupt expenditure,” she said.

She also noted that the Office of the Premier‘s Integrity Monitoring Unit has instituted five investigations into alleged procurement irregularities, fraud, corruption, theft and misuse of public funds by employees during the financial year in question.