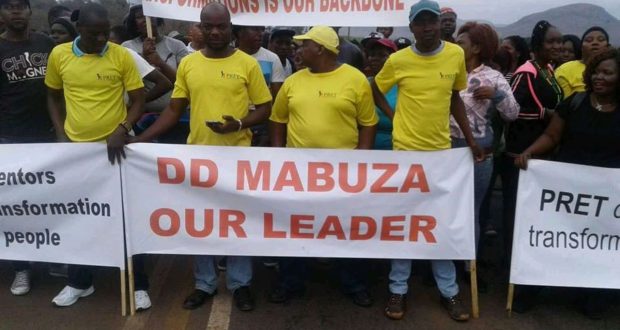 WATCH VIDEO: Leaders and official structures of the African National Congress in Mpumalanga province have not publicly declared their preferred leaders in the coming national conference of the governing party, but a private has provided a hint of the province’s preference.

The letter, purportedly from the secretary general of the Practical Radical Economic Transformation (PRET), Sunday Mathebula, instructs its members and those of the ANC to vote for Nkosazana Dlamini-Zuma and premier David Mabuza for the positions of president and deputy president of the governing party respectively.

The PRET group, was registered as a non-profit company in May this year and it lists as its directors, tenderpreneur Themba Sigudla, Sunday Mathebula and Ian Ross Dunn.

“This entity has been endorsed by the Premier of the Mpumalanga provincial government Mr DD Mabuza as a social partner to assist government in the plight against poverty, unemployment and inequalities,” says Mathebula in the letter.

Mabuza is on record addressing more than 10 000 community members in Naas, Nkomazi municipality that “I’m the one who told Sgudla to form PRET”.

Themba Sgudla, also knows as “Masofa” formed PRET and told the full KaMaqhekeza stadium in Naas last month that PRET has over 600 000 members in Mpumalanga which is a number bigger than the ANC membership in the province, and almost the size of the entire membership of the ANC in the country.

Sgudla promised to deliver those members mostly unemployed youth to the ANC which Mabuza acknowledged.

In the letter which Ziwaphi has a copy of, the secretary general of PRET SA, Sunday Mathebula instructs its regional leaders, who are referred to as chief generals or leaders to:

1. participate in all BGM meetings of the ANC.

2. Make sure that their members are all members of the ANC and participate in the branch general meetings (BGMs).

3. Inform or request active ANC and PRET members to nominate “the honorable Nkosazana Zuma as the new president and the honorable DD Mabuza as new deputy president”.

The letter say the directive is valid as the BGMs are in full swing and that from the 25th of October and the generals have got to report back to their SG.

Members who had been sent the letter are also told not to share the letter. But it appears like the instruction fell on deaf ears because it soon went viral on social media.

Last month PRET marched to former TSB sugar now RCL foods owned by billionaire Johann Rupert’s REMGRO demanding that 1500 people be employed. In that meeting, they also proclaimed that Mabuza had endorsed them.

None of their demands have been realized.

The organisation which in one of its meetings cooked and provided food and also dished out R100 notes for the unemployed youth to buy for themselves whatever they wanted. They have been attending a number of ANC BGM meetings in the Ehlanzeni region and gaining more support from mostly unemployed youth and sidelined by current leadership of the ANC in the region.

A video showing PRET members humiliating current ANC regional chairperson, Ngrayi Ngwenya, has gone viral on social media. The video shows PRET leaders offering Ngwenya a platform to speak, but the audiences are heard and howling him, and he was forced to walk out of the meeting.

Mpumalanga MEC for economic development and tourism, Erick Kholwane is also seen laughing gleefully as Ngwenya leaves the hall where the meeting was held.

Ironically, Ngwenya also rose through the ranks of the ANC using a private organisation called Skhonyane, which was brutalising members of the ANC in Nkomazi.

Provincial secretary of the ANC Mandla Ndlovu said he was not aware that Mabuza started PRET hence will not speak on that.

“We have not pronounced as the province, we are waiting for the consolidation of ward nominations. I did not hear the chairperson saying he started PRET, unless if the PEC took a decision to form PRET I was going to respond” said Ndlovu.

Some PRET members who are part of other political parties did not like the call.

“The direction is lost our people will suffer the consequences. I’m not in PRET for political reasons, I have my political party and this is a clear sign that all along we have been lied to. If I (were) a member of the ANC I would go for Cyril Ramaphosa not the woman,” said PRET member who did not want to be named.

(See the video on www.ziwaphi.com).