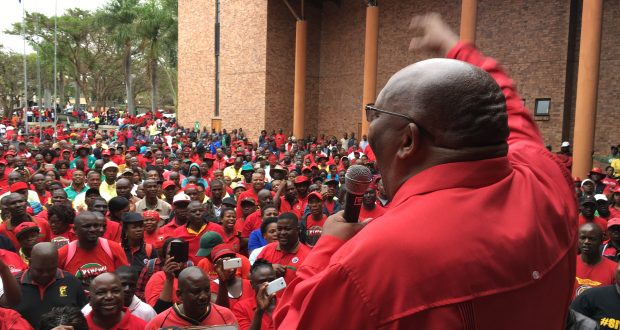 Lechesa Tsenoli, the deputy speaker of parliament addressing thousands of marchers at the Mpumalanga provincial legislature.

The Mpumalanga leg off the nation-wide strike by the Congress of the South African Trade Unions turned ugly on Wednesday morning when police fired a stun grenades and the province’s premier failed to receive the memorandum of demands on state capture and corruption.

Things started getting out of hand when a small group of marchers allegedly broke away from the main group and took a detour of the agreed route.

Members of the South African Police Service (SAPS) public order unit tried to block them, but were outnumbered by the marchers.

That’s when a senior police officer, who was wearing a name badge bearing the surname of Sithole, rushed ahead of the marchers and launched a stunt grenade sending the marchers scattering in all directions.

The deputy speaker of the National Assembly, who is also the member of the South African Communist Party, Lechesa Tsenoli, and one of the leaders of the march, moved swiftly to calm the situation.

Sithole told Lechesa to apply for new permission to use a different route than the one approved and swore that he would not allow marchers to march on the regional road, R40, which links Mbombela city and White River to the north.

Tesnoli tried to reason with Sithole to allow the marchers to proceed with the march on the agreed route, but the policeman, who thought that Lechesa was disagreeing with him, continued to argue with the deputy speaker nonetheless.

“It’s you as the leadership who applied. So, I’m saying – must we now change the routes?” Asked Sithole.

To which Tsenoli said, “We can’t contest that, we are merely trying to manage the situation.”

In an interview afterwards, Tsenoli, said that the incident took place few metres from where he was. He described it as unfortunate.

“I was literally metres away from. If that thing had been handled differently and that (stunt grenade) not handed over to him, it wouldn’t have angered the marchers the way it (did). It was an unfortunate incident, it shouldn’t have happened.

“Thankfully, they did pass another (stunt) grenade to this guy, but he didn’t use it, fortunately, because we intervened and pleaded with them to allow us to go through,” said Tsenodi.

The police subsequently allowed the march to go uninterrupted, until they tried to block the marchers from entering the Freedom Square, in front of the Mpumalanga provincial legislature. Again, the marchers outnumbered the police, who had been reinforced by Mbombela municipality’s instant police.

Provincial police spokesperson, Leonard Hlathi confirmed that the police used a stunt grenade because the marchers were unruly.

“Our plan in terms of operational talks to the routes on which we had agreed upon. So (we said) let’s go back to the original plan. That’s when they became a little bit unruly, we were compelled to fire a stunt grenade, and immediately after that, the march continued until the end. No one was injured, and no one was fired at, it was just a stunt grenade that was unleashed,” he said.

After almost two hours of negotiation, the leaders of the march decided that they would not hand over the memorandum to anyone except Mabuza, who was said to be out of the province.

COSATU’s Losi, however, disputed that and said he was in the same flight as Mabuza, when she came to the province on Tuesday.

“We continue to be provoked by the premier of Mpumalanga. When we planned this march, we sent a letter stating that the premier Mabuza would receive the memorandum in Nelspruit. We were in the same flight from Johannesburg to Nelspruit, we were in the last flight. Now we are being told that he’s out of the province,” she said.

“We are told this is not the first time that he does this. Previously he failed to receive a memorandum. We are not going to settle for anything less than premier DD Mabuza receiving the memorandum. When they say he’s out of the province, he’s probably seated at his farm,” she said to applause.

Mabuza’s spokesperson, Zibonele Mncango disputed COSATU’s accusation. He said that the premier had not received any specific request to personally receive the memorandum, hence he delegated Shongwe.

“There was no specific request from the organisers that they wanted him to be physically present to receive the memorandum. That is why he delegated the leader of government business, Mr Shongwe,” said Mncwango.

Mncwango said that Mabuza had created a forum where he meets with organised labour and listens to their grievances. He challenged the march leaders to invite Mabuza if they wanted to engage him on other issues, such as corruption and state capture.

Previous: Fear that “negligent” doctors are still at work
Next: Woman blames police inaction for her abuse