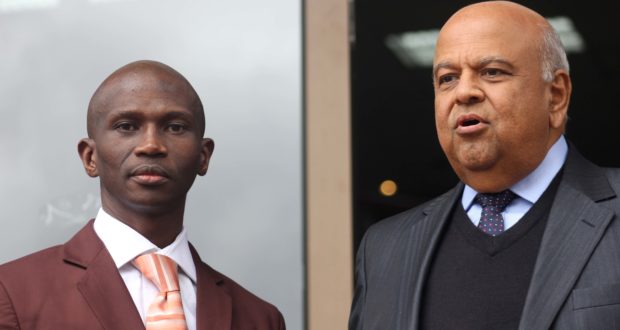 Mpumalanga Premier David Mabuza has prevented a journalist from asking the Minister of Finance questions regarding court cases involving the minister, during a media briefing at Mbombela on Tuesday, 18 October.

Finance Minister, Pravin Gordhan had agreed that the journalist, Ngwako Modjadji, from The Citizen newspaper, could ask him a question that was not related to the minister’s visit to the province.

“Pardon me Mr Minister, my question is not related to what you’ve just said,” said Modjadji.

“You mustn’t ask it. But go ahead. We are in a democracy,” said Gordhan, apparently on second thoughts.

But before Modjadji could pose his question, Mabuza interjected, ordering the journalist not to ask unrelated questions. “No! If the question is not related to our subject today, let’s not deviate. Let’s follow what is the subject of the day,” said Mabuza.

Gordhan had to swiftly reverse his earlier decision. “This is his house, so you’ve got to follow his rules, that’s fine,” said Gordhan, slanting his head towards Mabuza.

A visibly upset Modjadji said he did not expect Mabuza’s gagging. “It was not good at all. I did not expect it. I thought they would allow us to ask questions. So I felt embarrassed. I find it surprising that the minister agreed, but the premier said we should not deviate,” said Modjadji.

He disclosed afterwards that he had wanted to ask the minister about his pending court cases.

“I wanted to ask the Minister of Finance, Pravin Gordhan about his fraud charges and also about the bombshell that he dropped last week about the Guptas,” he said.

Gordhan had been slapped with fraud and theft charges for approving the payment of R1,1 million to the Government Employees Pension Fund (GEPF) on behalf of former deputy commissioner of the South African Revenue Services (SARS), Ivan Pillay.

Last week Gordhan applied to the High Court for an order declaring that he is not empowered by law to intervene on behalf of Oakbay Investments and a number of companies owned by the powerful Gupta family who are friends of the President of the Republic of South Africa, Jacob Zuma.

According to Gordhan’s founding affidavit, the Gupta owned companies had their bank accounts closed after the companies were found to be engaging in “suspicious transactions” according to the Financial Intelligence Centre Act 21 of 2001.

Gordhan’s court case has increasingly been seen as a ploy to expose the influence that the Gupta family has on the affairs of government.

Modjadji said he did not want to speculate on his gagging.

“Some are saying he didn’t want to embarrass the President because of his close relationship with the President, that’s what my colleagues are telling me,” said Modjadji.

Mabuza is a close ally of President Zuma. Earlier this year, Mabuza, who is also the provincial chairperson of the African National Congress, said that his organisation would pay back to government part of the R246 million that was used to finance the security upgrades at his private residence in Nkandla.

Mabuza’s spokesperson, Zibonele Mncwango, defended Mabuza’s actions. He said the premier was merely supporting the fact that the minister had initially said that the journalist should not ask the question, even though he had changed his mind

“The premier felt that it was irrelevant for that press conference, because the press conference was supposed to tell the media about the discussions of the meeting,” said Mncwango.