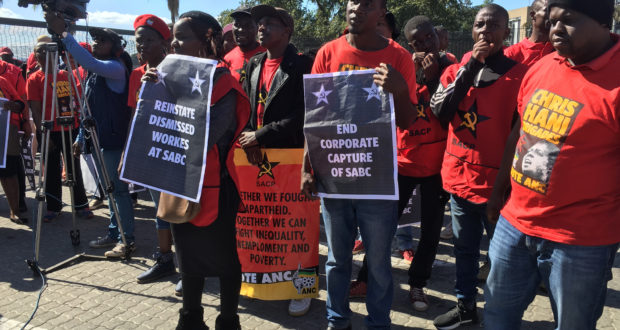 Provincial leaders of the South African Communist Party (SACP) have accused the shareholders of a top furniture shop in Mpumalanga’s capital city of being racist.

“That behaviour is anti-communist because it wants to purport communists as being violent. It is based on the swart gevaar ideology because they don’t have any history of the South African Communist Party protest turning violent. It’s stereotyped apartheid propaganda against communists. They are also racists because they generalise everything that is done by black people as violent. They should have engaged with us first to check whether there was any possibility for the picket to become violent,” said SACP provincial secretary Bonakele Majuba.

The SACP was forced to picket at the entrance of the shopping centre.

Staffers at the SABC who spoke on condition of anonymity said that while Lenyai had instructed them not to cover the picket, an instruction from the SABC head office overruled him and a cameraman and a reporter were sent to cover the event.

The picket was part of the SACP’s nationwide protests against Motsoeneng after he had decreed the banning of violent protests on the public broadcaster’s television news.

Spokesperson for the Bakos Brothers’ City Centre in Mbombela, Cheryl Gore, said the decision to block the SACP picket came from the shareholders for fear of violence during the picketing.

“Whenever there are protests you don’t know whether they are going to be peaceful or violent. So we were a little bit concerned because we didn’t want the other tenants to be affected. So it was the shareholders in Jo’burg that made the decision that we rather lock the gates and let the SACP protest outside,” said Gore, during a telephonic interview.

Gore was adamant that the company’s decision did not infringe on the SACP’s right to protest, even though the organisation had been granted the permission to protest.

“They were still able to protest at the gate, their presence was felt, and it was televised in the news,” said Gore.

Several attempts to obtain comment from Lenyai were frustrated as his office staff refused to transfer phone calls to him, but referred the matter to SABC regional spokesperson Nyiko Makuleke.

Maluleke later said he referred the questions to his national communications boss, Kaizer Kganyago, who failed to respond over three working days.

Kganyago also failed to pick up calls from Ziwaphi.