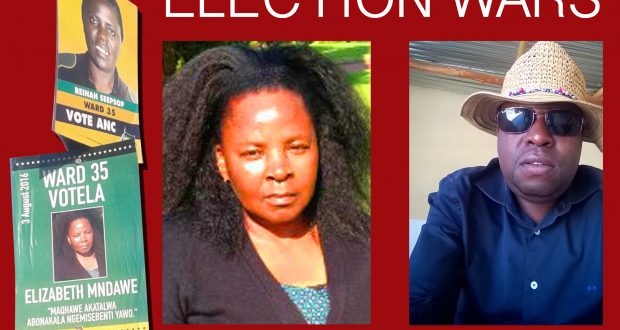 Independent councillors will get no municipal budgets – ANC leader

An African National Congress (DA) leader in Mpumalanga has admitted to saying no budgets will be allocated to municipal wards that are won by independent candidate councillors.
The ANC leader, Majaheni Nyalunga, who is also a serving councillor in Mbombela’s Ward 35, issued the warning, which was secretly recorded by a community member last Tuesday.
“If there’s one person who is (an independent) councillor, against 100 (ANC) people, where will she ask for the budget? Because she has to ask for it from us, and then we will give it to her. If she is not part of us, we definitely will not give it to her. If she is voted for and wins here, she will stay for five years and not a thing will happen here. That’s the truth that we cannot dispute,” Nyalunga is heard saying in the audio.
The main contenders for Ward 35 are the ANC’s Reina Seepsop and independent candidate Elizabeth Mndawe. Both candidates are Branch Executive Committee (BEC) members of the ANC.
The ANC leaders in the province, however, opted for Seepsop while the community favoured Mndawe in a bizarre nomination process, where voters were asked to whistle and the candidate who received the louder whistles won the contest.
Nyalunga confirmed that it was his voice on the tape and that he was aware of who had recorded him.
He said there was nothing unusual about what he did and accused Mndawe of saying unsavoury things about the governing ANC.
“We are going to elections. It’s war. She also said the ANC was a skeleton – a body without meat, (anytime) it can die. I was also responding,” said Nyalunga.
Mndawe, who cried foul at the latest incident, said that she had confronted Nyalunga, but he denied the allegations.
“I phoned and asked him about his statements, but he denied them, so I’m left with no choice but to report him to the IEC,” she said.
She also disclosed that this was a second incident by Nyalunga and that she had reported an earlier incident to the Electoral Commission (IEC) in which he was also recorded on video allegedly telling people that, Mndawe, who runs a Home Based Care for people living with HIV, was handing out rotten food and clothes of dead white people.
When approached for comment and asked if the ruling party would not be punishing the community by withdrawing the budget for electing an independent candidate, he was unwavering.
“We are in charge, chief. Indeed, where is she going to get the budget? I was telling the people the frustrations that she will encounter, so I didn’t want her to take the people to frustrate them with her. She will be lonely,” said Nyalunga.
ANC regional secretary, Phazamisa Mathe, condemned those who recorded Nyalunga.
“Comrades should counsel each other if another is doing things that do not assist the organisation, instead of recording them and taking the recording everywhere, meanwhile on the other side they are the members of the ANC. I don’t want to work with people who are holding aces against me.”
He requested to be given more time to respond as he said he was busy with an ANC programme.
When called on Monday, however, his phone went unanswered and the voicemail was full.