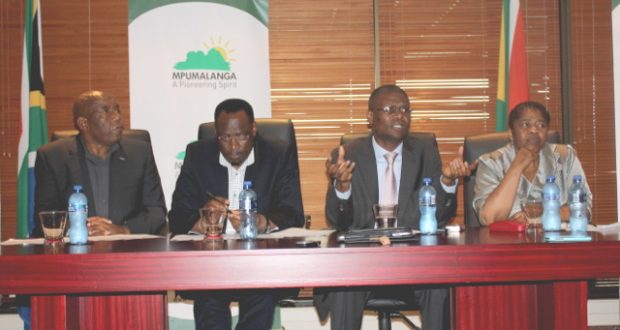 The ghost of Nelson Mandela’s two memorial events that the Mpumalanga provincial government paid for but failed to take place has come back to haunt South African deputy minister for rural development and land reform Candith Mashego-Dlamini.
On March 20, 2014, Mashego-Dlamini, who was health and social development MEC when former State President Nelson Mandela died in December 2013, read out a public statement claiming that the Mpumalanga Premier’s Office had paid for five memorial events – and that all five took place.
The statement Dlamini read stated that 25 000 attended an event in Ermelo, when there was no event at all.
When the media exposed the Mpumalanga provincial government for spending R70 million on the five Mandela memorial services, of which R44,2 million was paid to Carol Bouwer Productions, the Premier’s Office accused the media of politicking.
“As a provincial government we are surprised and shocked by such loaded media reports which we regard as misrepresentation of facts informed by politicking with an intention to tarnish the image of our provincial government and that of the ruling party,” said Mashego-Dlamini, at the time.
According to a leaked report African Eye News Service has seen, Carol Bouwer Productions informed the Mpumalanga provincial government that two of the events were cancelled.
The report did not indicate which other event, outside the Ermelo one, did not happen.
“Further to the discussions held regarding the cancellation of the last two events, due to bad weather predicted, we have done our best to negotiate with suppliers for reduced cancellation fees and where possible non-payment at all,” reads a letter dated December 11, 2013, which was signed by the owner of the company and sent to the provincial government before the media briefing three months down the line.
During the press briefing, Mashego-Dlamini painted a good picture that sought to convince the public that all five events were held.
“While providing the political guidance and ensuring dignified memorial services for our late former President, as a political committee mandated by the Honourable Premier, we would like to reiterate our stance that we are satisfied with the manner all five memorial services were handled. We received value for money.
“The events were a success as transport, catering and numerous event-related items had to be provided and be procured in respect of the various venues where the provincial memorial events took place. All five rallies held in the province were successful and the attendance was as follows: Middelburg 10 000 people, Ermelo 25 000 people, Bushbuckridge 20 000 people and Driekoppies 15 000 people,” said Mashego-Dlamini.
Apart from these discrepancies, the statement Mashego-Dlamini read out also exaggerated the attendance numbers of the events that did take place.
She said the Mbombela stadium, with a sitting capacity of 43 000, was attended by people almost twice its capacity.
“The main memorial service was held at Mbombela Stadium. It was attended by more than 80 000 people who travelled from different corners of the Province. This event was connected by satellite to the main national event held in Gauteng,” read the statement.
The same applies to the Middelburg event, which was held in a 3 000 seat hall.
The provincial government publicly reported that 10 000 people attended the event.
When the discrepancies were brought to the attention of Mpumalanga Premier David Mabuza’s spokesperson, Zibonele Mncwango, he failed to respond.
However, Mashego-Dlamini sounded shocked when asked to comment on the non-existent event she proclaimed had taken place and were well-attended.
“We had a briefing with the then director-general (Dr Nonhlanhla Mkhize), and she told us that the report on the Mandela memorial services had not been finalised,” said Mashego-Dlamini this week. “If the information that you are giving me is accurate, then clearly we were misled.” Carol Bouwer Productions’ spokesperson, who’s name was given as Grant Rooi, failed to respond to phone messages and written questions emailed to him in May 2016.
A voice mail on former Director-General, Dr Nonhlanhla Mkhize’s cellphone, said the number was no longer in existence.