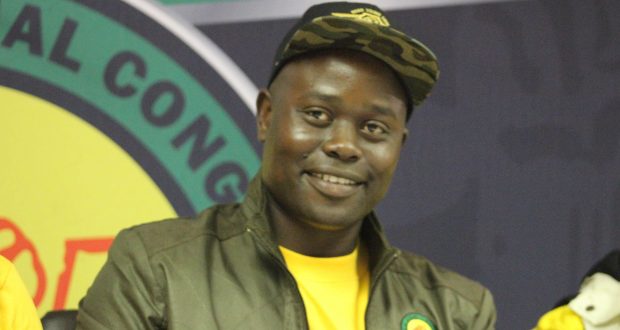 Mabulu is an amoeba – ANCYL

The African National Youth Congress League (ANCYL) in Mpumalanga has dismissed artist Ayanda Mabulu as “an amoeba who does not know where he is going.”
The league was responding to Mabula’s latest paintings which depict President Jacob Zuma performing sexual acts with businessman Atul Gupta inside the cockpit of what is believed to be a jet owned by the rich Gupta family.
“So we feel very much disturbed when artists try to be creative in a way that is out of order. But nevertheless we don’t want to put our energy in discussing a lumpen, a clown of note that looks like an amoeba who does not know where he’s going,” said the league’s newly elected provincial chairperson, Tim Mashele.
Mashele, who was speaking during press conference recently held in Mbombela, said Mabulu’s painting disregarded African culture of respect for the elderly.
“We feel very undermined as the ANCYL and as young people in the country, that when artists decide to be creative, their creativity is out of the way. We are Africans, we believe that we must respect each other. Every old person is an uncle, a father or grandfather,” he said.
The painting has sparked heated debates within the social media world, with others calling for the artist to be sued while others say the painting was an accurate depiction of the president’s conduct.
Another debate has also ensued on the online Culture Review Magazine.
“(I suggest) the Zuma family take legal action in view of the defamatory artworks so displayed. And I stand by that. No matter how bad a person is, it is an ill-advised thought to defame him/her the way that artwork depicts Mr. Zuma,” says Christopher Ngwenya.
A Mabulu supporter who calls himself “A Common Tree” believes the painting has a message.
“If artists are meant to interpret their milieu this is a job well done. I don’t suppose it’s the kind of art a lot of people would want hanging in the hallway though,” reads the post.
Mabulu could not be reached for comment.
However, his website describes the painting as a depiction of the so-called state capture by the powerful Gupta family who are friends with President Zuma and business partners with one of his sons.
“The work is really aimed at the masters who are controlling our leader. And the Guptas are one of those masters. It’s not personal because it goes beyond the president,” says Mabulu.