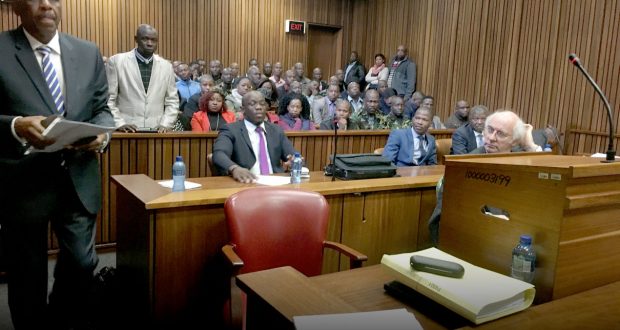 IN THE DOCK: Former ANC Treasurer-General, Dr Mathews Phosa taking a stand in a packed court room at the High Court in Pretoria. His accuser, Mpumalanga premier, David Mabuza is seated

Mpumalanga premier David Mabuza may have encouraged a witness to lie against businessman and politician, Mathews Phosa, said Gauteng High Court Judge Bill Prinsloo when he handed down judgment in the R10m civil claim that Mabuza had brought against Phosa.

The case emanates from a report which named Mabuza as a police informer who was spying on his comrades during the struggle against the apartheid government.

Mabuza’s star witness, Jan Venter, had claimed that Phosa and his business partner, Nick Elliot, had authored the report, but the judge ruled that Mabuza may have advocated Venter to make the allegations in return for large sums of money which were channelled to Venter through Mabuza’s lawyer, Ian Small-Smith and other people.

The judge said he was left with the impression that Mabuza was responsible for channelling money to Venter through Small-Smith.

“Venter received substantial amounts of money channelled to him by Small-Smith through various persons who actually delivered the cash to him. I was left with a strong impression that the money was coming from the plaintiff himself,” said Prinsloo.

He also said that Mabuza had already accused Phosa of authoring the so-called Spy Report, even before he had been informed that Phosa had written the report.

Court records show that Mabuza met with witness Venter on November 24, 2014. It was at this meeting that Mabuza claims he was informed that Phosa authored the document.

In letters of demand to Phosa dated November 14 and 17, 2014, however, Mabuza’s attorney claims that Phosa and Elliot wrote the document.

The judge was scathing on Mabuza’s failure to testify in order to clarify this discrepancy and to rebut other allegations against him.

“It is difficult to understand why the plaintiff elected not to testify when his testimony on certain issues may have been of assistance to the court.

“For example, he may have given more details about his 24 November meeting with Venter and he may have been able to explain why Venter was given substantial amounts of money through the participation of Small-Smith and other carriers who delivered the cash.

“He may also have been able to explain why he already announced the defendant’s involvement in the creation of the Spy Report well before he met Venter,” said Prinsloo.

The judge’s ruling also dealt a blow to Mabuza’s attempt to discount the allegations contained in the document.

In fact, the judge said Phosa would have had an exceptional memory to recall all the details about Mabuza’s alleged spying activities.

“The defendant must have exhibited extra ordinary powers of recollection to compile such a document with all those details, many years after the alleged incidents took place (or an exceptionally fertile imagination to dream up such incidents if they never took place), by simply scribbling notes on some blank paper in the serene circumstances of his veranda in the company of Elliot,” said Prinsloo.

He also ruled that, in fact, it was Mabuza who had tarnished Phosa’s reputation.

“It was argued that these ‘scurrilous accusations’ have been widely reported in the media and have seriously tarnished the defendant’s good name and reputation. It was argued, correctly on the evidence as I have considered it, that the allegations were unjustified,” said Prinsloo.

Phosa had some harsh words for Mabuza and his attorney, Small-Smith.

“Justice has prevailed. The court ruling this morning has proven my innocence. I was telling the truth and Mabuza was lying all along. Truth is mighty and always prevails. To Ian Small-Smith, all I can say is that ‘it’s a shame to a learned friend’,” he said.

Phosa said that he would not sue Mabuza and other African National Congress leaders who were making similar allegations.

“I will not sue them for defaming me. I have no spirit of revenge in me. They are a bunch of fools,” he said.

He called on Mabuza not to use the taxpayers’ money to pay for the legal costs, and said that he would donate half of the legal costs to charity organisations.

“I expect Mr Mabuza to pay the costs from his own pocket, not from the government coffers, and half of the costs I want to give to different charities,” said Phosa.

Mabuza’s spokesperson, Zibonele Mncwango, had not responded to written questions at the time of publication.