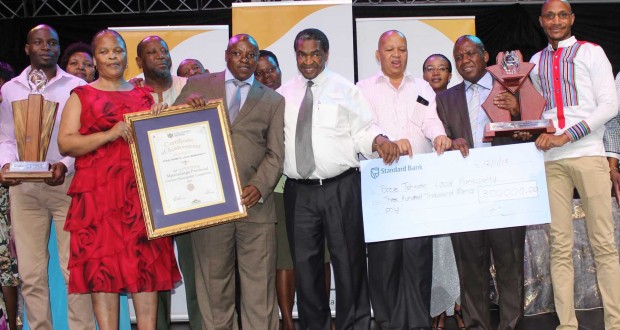 The entity, which is based in Middelburg, won R300 000 and a certificate at the annual provincial Greenest Municipalities Competition held in Emalahleni recently.

“We work together with our communities to build an informative society about greening and also encourage them to maintain our parks, conserve water. We are now aiming for a consistent green lifestyle and clean audit, everything should be green,” said municipal manager Mandla Mnguni.

Mnguni said everyone at the municipality worked hard to ensure that whatever they do doesn’t have a negative impact on the environment.

Previously called the Cleanest Town Competition, the Greenest Municipality Competition started in 2001, to encourage municipalities to do recycling and re-using waste material.

Mnguni promised that their municipality will represent the province at the national leg of the competition.

“We have learned from our mistakes in 2013 and this time we are prepared and we will bring the national prize to the province and invest the money in various environmental projects,” he said.

The Mkhondo local municipality was awarded twice at the competition, winning a total of R300 000. They took third position as the greenest municipality, winning R200 000 and they also won the Most Improved Municipality award, winning R100 000.

“We come a long way as a poor municipality from the deep rural areas. This will help us expand our greening projects and involve more young people in the parks, gardens and also landfill projects. We managed to use the limited resources that we have to create a beautiful green environment for the municipality,” said Mkhondo senior manager in solid waste Vusi Dube.

When handing over the awards, Department of Agriculture, Rural Development, Land and Environmental Affairs MEC Andries Gamede encouraged municipalities to create awareness about waste management and also do away with pollution.

“Collecting waste can be a job opportunity waiting to be realised and municipalities must create awareness so that the public can understand how recycling can benefit them. I am glad that most municipalities are heading into the right direction but next year I expect every municipality to participate in the competition,” said Gamede.

Written by: Ziwaphi on 6th Jan 2016.
2016-01-06
Ziwaphi
Previous: Future stars being prepared for life after soccer
Next: Youth online directory a gateway to job creation – MEC