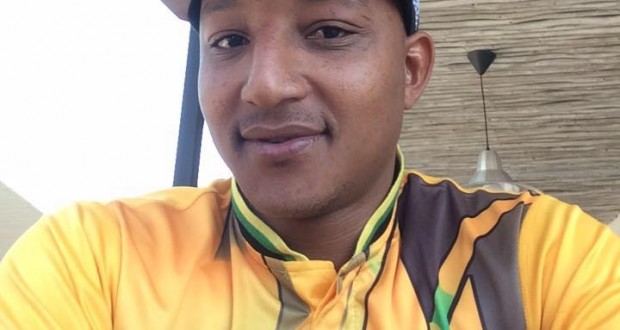 MURDER RAP: Facebook image of Pholoso Mbatsane, the regional secretary of the ANCYL.

Ehlanzeni regional secretary of the ANC youth league in Mpumalanga Pholoso Mbatsane who was arrested in connection with attempted murder to an EFF member has been released on bail.
Mbatsane, 30, was arrested on Sunday after he allegedly shot EFF member Thokozane Zulu three times in a fight over a match box at Ngodini township on the west of Mbombela city on Sunday.
“Yes we have arrested a 30-year-old man on charges of attempted murder. What we got is that the accused shot the victim on the lower body and foot, what we know now is that the suspect fired three shots.” Said spokeswoman of the KaBokweni.
Mbatsane was not asked to plead on an attempted murder charge and was released on R2000 bail and is expected back at the Kabokweni magistrate court on January 3 2016 .
EFF chairperson in the province Collen Sedibe said ANC is in a panic mode after the launch of the EFF hence the violence directed at EFF members is rife. He vowed that they will defend themselves.
“The ANC is in a panic mode, since the arrival of the EFF they are not resting. This is like father like son, the chairperson of the regional ANCYL is also attending a murder case and now his secretary is attending an attempted murder case and if that fighter did not see him when he withdrew the gun he would have shot him in the head, hence he managed to move his head and got his feet since he was seated,”
“As EFF we can not tolerate the criminality of the ANC and most of the time, they are not getting punished because they interfere with the courts, so we will start to defend ourselves. For now because we are heading to the local government elections and such barbaric acts from the ANC and going to be rife, hence we will be ready to defend ourselves,” said Sedibe.
Ehlanzeni Regional chairperson Bheki Lubisi, who is also facing murder charges, said they are not aware of their secretary’s arrest but they will ask for a report from him.
“As we speak our secretary’s arrest is new (sic) to us, we do not know, but we await a formal report to the structure and then we can better communicate (any action),” said Lubisi.
2015-12-10
Mandla Khoza
Previous: Zuma tells ministers to address Bushbuckridge problems before February
Next: SPY SAGA: Hunter becomes the hunted