Don't Miss
Home / News / “The cat is back,” Premier tells his detractors 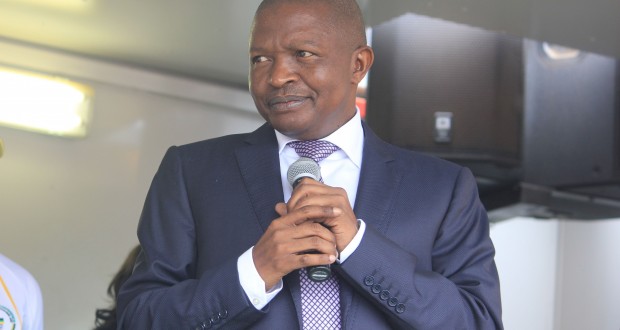 “The cat is back,” Premier tells his detractors

Mpumalanga Premier David Mabuza has warned his detractors that the time for mice running around the provincial government headquarters spreading rumours that he was either insane or dead has come to an end.

Mabuza became the centre of attention during his triumphant return to his offices at the government complex in Mbombela on Tuesday morning.

Scores of ANC members, government employees and journalists gathered to welcome him and hear his side of the story.

“Few people appeared saying I am mad. That is serious hatred. Others said ‘he is dead’ while I am alive. What does a rat… do when the cat is not around? The rat does whatever it wants. When they ask where is the cat? They say is not available. They say the cat is not here. No, the cat is back… Know that the cat is back… The mice are going to run,” said Mabuza.

Mabuza said even young people were saying the “main dog” was not around, which allowed people to play around.

“I heard that the [wild animals] were playing everywhere during the day. I do not know. I see a building here and I do not know if people were working,” he said.

The Premier, who went on leave at the beginning of September after collapsing due to extreme exhaustion, admitted that he was airlifted to the Little Company of Mary Hospital in Pretoria, Gauteng, where he spent some time.

“I was welcomed by the doctors and the nurses [there]. One day as I was sleeping in my bed and I heard people singing, singing nice songs, like this people are close to God. I slept and I said ‘I like that song.’ In the morning I asked the nurses [about the singing] and they said no, it is our culture here,” he said, jokingly.

He thanked all the comrades who had his back while he faced a difficult time.

He thanked President Jacob Zuma and acting Premier Vusi Shongwe for their support.

“You media know that the cat is back, leave Shongwe, I am ready to respond, but the only thing that I won’t tell you is what made me sick… I will not tell you,” said Mabuza.