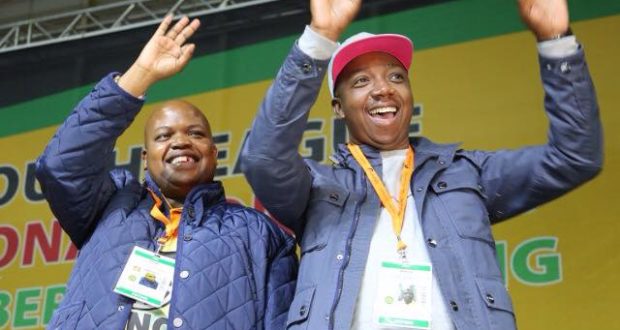 ANCYL deputy president (right) seen in this picture with ANCYL president Collen Maine after their election at the league's congress.

Mpumalanga education authorities have denied suggestions that the requirements of a director’s post in the Department of Education were lowered to suit newly elected deputy president of the ANC Youth League (ANCYL), Desmond Moela.

Provincial department spokesman Jasper Zwane said the post was not created to suit Moela at all but that the requirements for the post were those that had been advertised.

“We do not create posts for people. It has never happened and will never happen in this democratic dispensation. Requirements were stated on the post, people applied and Moela got the job,” said Zwane, who was reluctant to entertain that the post required a Bachelor’s Degree.

The department has been dodging questions about Moela’s appointment since December last year.

Moela’s appointment as director for human resource (HR) capacity development was made public during a post executive council media briefing by Mpumalanga Department of Health MEC, Gillion Mashego, in December, 2014.

At the time, when asked about Moela’s qualifications, Mashego reasoned that he could have met the requirements of the post on the basis of what he called “equivalent of”.

“This thing of requirements and qualifications in the appointment of Desmond Moela is not an issue. We don’t have the advert with us here, but normally you will know the advert will put requirements, and there is also the ‘equivalent of’.

“What we are saying as a matter of principle is that he satisfied all the requirements, and if there are other issues that need clarification, they can be taken with the Department of Education,” said Mashego.

Months before Moela’s appointment, the Department of Education had released a circular in which the post in question was advertised. The July 2014 circular stated that the educational requirements for the post were an “appropriate recognised Bachelor’s Degree or a Diploma or Grade 12 plus extensive appropriate experience.”

Zwane refused to answer questions on what Moela’s educational qualifications were. All he was prepared to say was that Moela emerged as the best candidate for the job during an interview for the post.

“The Department wishes to re-emphasize that it is satisfied that all due processes were followed to the letter in the filling of advertised vacant posts including that of the candidate in question.

“The advert was published in the City Press dated 06 July 2014 and the closing date was 24 July 2014. Applications were received [and] interviews conducted on 05 November 2014. Subsequently competency assessments were conducted leading to the Executive Council’s approval of the appointments,” he said.

Meanwhile, Moela has also refused to disclose if he had a three-year qualification.

During a telephonic interview with African Eye News Service (AENS), he said he knew why his educational credentials were being questioned and who was behind the leaking of the information.

“Talk to Jasper [Zwane]. I know where this [questioning of educational qualifications] is coming from. I know how it reached you, and who initiated it. I know who wants you to run this story and so on. [In] all these issues deal with Jasper, therefore I don’t want to talk now. I will respond when I’m ready,” said Moela.

An independent investigation by AENS, however, discovered Moela’s attempt for a three-year qualification was at the Tshwane University of Technology (TUT) in 2003, where he failed all three subjects that he had registered for. He eventually dropped out of the university the following year, after passing only three of six subjects.

If the information seen by AENS is complete, it means that Moela’s highest educational qualification is only a Grade 12 certificate, which makes him ineligible for appointment as a senior manager in the public service.

The main educational requirement for appointment in senior management in the public service is called the Required Vocational Qualification (RVQ13) – a post matric three-year qualification.

The investigation could not find any evidence to show that Moela had satisfied the RVQ 13 requirement.

A government HR practitioner, who spoke on condition of anonymity, told AENS that within the public service the equivalent of a Bachelor’s Degree is a national diploma plus relevant experience.

He said it is unheard of that Grade 12 and experience could be equivalent to a Bachelor’s Degree, let alone a post matric diploma.

Ironically, an assistant director’s position, which was advertised in the same departmental circular as Moela’s post, has similar educational requirements, even though it is two levels below the senior manager’s post.

The HR practitioner referred AENS to an almost similar post recently advertised by the KwaZulu-Natal provincial Department of Education.

The educational requirements of that position were an appropriate recognised Bachelor’s Degree or equivalent qualification coupled with a minimum of three years relevant managerial experience in the human resource development field.

That would be if Moela ever occupies the post because he has never even set foot in his new office since his appointment in December 2014.

Zwane confirmed that there was an internal departmental arrangement that allowed Moela to remain in the office of the department’s MEC Reginah Mhaule, where he had been acting in the role-playing post as Mhaule’s personal assistant.

“As things stand the official in question has been duly seconded to the office of the MEC and is executing his duties in line with the framework that governs such. This is based on a departmental internal arrangement,” said Zwane.

Moela’s previous position was linked to the term of office of the MEC, however, since December last year, he is now a permanent employee.

Like all senior managers in the public service, Moela is expected to sign a performance agreement soon after his appointment. However, Zwane could not explain if Moela had done so.

Meanwhile, last week, work came to a standstill at the head office of the Department of Education following Moela’s election as the deputy president of the ANCYL.

An official, who spoke on condition of anonymity for fear of vilification, told this newspaper that he and his co-workers were summoned from their offices to assemble at the office’s basement parking to celebrate Moela’s victory.

Zwane downplayed the incident, saying that the celebrations were not an official event, even though he confirmed that MEC Mhaule was the main speaker at the event.

He said that staff members voluntarily attended the celebration.

“It happens from time to time that officials will during tea or lunch break go to the basement either to pray, celebrate birthdays, for choir rehearsals, to do a host of their own matters as it has happened when the official in question was welcomed.

“This did not take place in the departmental office or foyer but at the basement during lunch. Our view is that it had nothing to do with the department,” Zwane said.

A departmental employee however, told AENS that they were made to wait for more than an hour before Moela finally arrived.

“We were told that the event would start at 11 am, but by 12 pm we were still waiting for Desmond (Moela) to arrive,” said the official. – (By Tom Nkosi & Mandla Khoza)