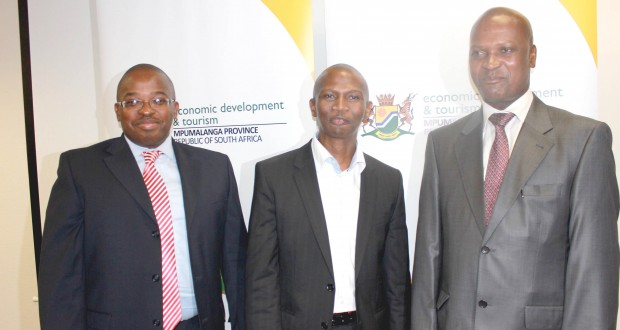 The Mpumalanga Economic Growth Agency has a new chief executive officer, affectionately known as Mr X, and this is the man that the leaders in the province believe will finally find the solution to the troubled parastatal.

Xola Sithole was introduced to the media on Wednesday by finance and economic development and tourism MEC, Skhumbuzo Kholwane at the provincial government complex.

Sithole admitted that he was aready aware of the challenges facing MEGA but did not want to pre-empt what he was going to do to turn the parastatal around.

“There is a very common trap that many new leaders come from outside organisations coming to new organisations feel the obligation to say ‘I have an answer’. I choose not to fall in that trap.”

“It is important that I take this time, even though there’s public information about MEGA that I have read. I need the to interact with the staff and the leadership of MEGA and other stakeholders related to the organisation. Having an answer before you’ve done that would be irresponsible,” he said.

MEGA which had been plagued by political interference and interference by the board of directors in the past, had spent the past three years failing to achieve any of its own targets. This while its entire budget being spent.

The MEGA board and MEC Kholwane were forced to expel the former CEO, Boyce Mkhize, after Ziwaphi exposed a series of irregularities taking place in the parastatal.

Current acting chairperson of the board, Davis Mculu assured the media that Mkhize was not off the hook yet, and that internal investigations were still continuing to determine if there was any wrongdoing during his stint as the CEO.

Sithole is the fifth person to occupy the position in five years.

According to a statement issued by the department, he had worked for Khula Enterprises, the Industrial Development Corporation,

He also established his own company which he ran for six years before deciding to join MEGA.

Sithole while not committing, seems to have already defined what his key success factors.

“The key to building a successful finance institution is to have clarity of purpose and a well defined strategy to achieve that purpose. Alignment between the shareholder, the board and the executive management, and regular communication with all the stakeholders and committed leadership team,” he said.