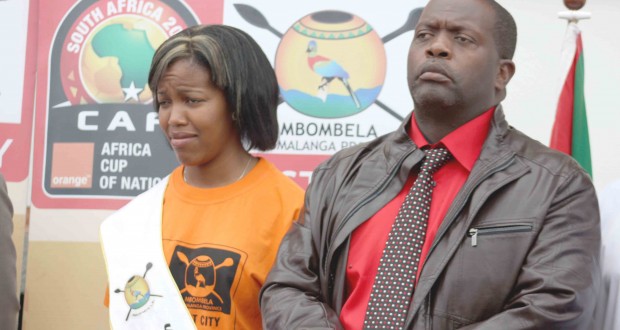 Ziwaphi’s exposé of the African Cup of Nations (AFCON) scandal claimed its first casualty with the decision by the Mbombela municipality to dismiss the capital city’s manager, Xolani Mzobe for his role in the scandal.
Last year, Ziwaphi exposed the scandal in a series of articles starting in July, which prompted an investigation by the MEC for co-operative governance and traditional affairs, Simon Skhosana in September 2013.
While Skhosana had undertaken to release the report to the public, Ziwaphi’s efforts to access it have proven fruitless.
Information seen by Ziwaphi, however, shows that the investigation found that the allegations that the newspaper published were all true.
“The allegations of procurement irregularity did in fact exist and it is clear … that the accounting officer failed and or neglected to follow Municipality supply chain management policy,” according to information seen by Ziwaphi.
The disciplinary processes against Mzobe and those who were involved in the scandal was dogged by delays, raising speculations that there was a deliberate attempt to sabotage the case in favour of Mzobe.
These speculations were further fuelled, when earlier this year it emerged that Mbombela executive mayor, Cathy Dlamini, had failed to implement council resolutions regarding the institution of disciplinary hearing against those implicated in the scandal.
The council then took a resolution to remove Dlamini from the matter and appointed a team led by mayoral committee member, Sibusiso Mathonsi to implement the council resolutions regarding Mzobe.
Through Mathonsi’s efforts, Mzobe was subjected to a disciplinary hearing which started in February and at the conclusion he was found guilty as charged.
Earlier this month, the council took a decision to terminate Mzobe’s services.
“The disciplinary hearing for Mr Mzobe commenced on the 17th February 2014 and sat for several sittings and finally concluded a report to council that ruled to affirm the decision of the tribunal, which found Mr Mzobe guilty on 30 of the 32 charges preferred to him,” said Mathonsi in a media statement.
According to Mathonsi, Mzobe’s charges ranged from authorising procurement in contravention of regulations of the supply chain management, failure to report purported deviations to the auditor-general, payment of service providers for services rendered, failure to implement council resolutions as well as fraud and dishonesty.
Mathonsi said that the decision has already been communicated to Mzobe, and that he was entitled to take the matter for review.
“We have duly informed him of council’s decisions. As a municipality we respect Mr Mzobe’s rights to subject the outcomes of the tribunal to any review process at any level,” Mathonsi said.
He, however, declined to comment on the matters involving other council officials, saying that those matters still remain with the executive mayor.
“Those matters were not delegated to me, and therefore it would be inappropriate of me to comment about them,” he said.
Ziwaphi has established that the senior managers who are implicated in the scandal, like Rasheed Matola were never suspended, even though Mbombela spokesperson, Joseph Ngala had told Ziwaphi that letters of intention to suspend him was issued last year.
Ngala had earlier refused to comment on the progress made regarding charging other officials implicated in the scandal.
“We need to point out that disciplinary processes are internal matters that cannot at this stage be shared until they are concluded and presented to council,” Ngala said at the time.
The investigation by the MEC for Cogta found that Matola and Mzobe, collectively never followed supply chain management policy during the appointment of service providers.
“Evidence is glaring at us after document analysis that SCM processes were not followed and personnel from SCM unit were sidelined by the head of department and municipal manager,” reads a report seen by Ziwaphi.
The report states that a secretary in the Community Services department, which is led by Matola, was responsible for procurement of services related to the AFCON 2013, and that this was against policy and it exposed the municipality to corruption.
“Indeed the allegations were true, SCM processes were never followed by the head of department and municipal manager, which exposed the municipality to corruption, colluding and financial prejudice,” the report reads.
An investigation by Ziwaphi into the AFCON 2014 procurement discovered that a company called Thwalamshiwa Productions was paid R4, 1 million for a variety of services, including R1,5 million for radio advertisements in 10 community radios.
When Ziwaphi enquired from the concerned radio stations, it was discovered that none of them had received any request for quotations for the placement of advertisements in their radio stations.
Barberton Community Radio spokesman Sibusiso Shabangu said at the time that the Mbombela local municipality failed to cooperate with their station throughout the tournament despite attempts to get them onboard.
“They not only failed to give us any advertising; we even told them to come and promote the tournament at no cost, but they just went AWOL,” said Shabangu.
Kanyamazane community radio, now called Kasi FM also suffered the same fate.
“Mbombela local municipality does not advertise with us. The only time that the municipality advertised with us was in 2010 for an advert which was just under R1 000. It took us more than a year trying to get payment, and we gave up when they failed to pay,” said KaNyamazane Community Radio’s marketing manager Fortunate Nkambule at the time.
The owner of Thwalamshiwa, Fikile Thwala, whose company was paid R4,1 million, told Ziwaphi that the municipality should respond to the enquiries.
“Ask for information from them, I don’t want to answer questions, especially from the media and say things I don’t know. I am now full time in Jo’burg. I don’t work there. I don’t want to be part of those things there,” said Thwala. “Whoever has a problem must take it wherever it’s supposed to be taken, whether it’s the radio stations. I don’t want to be part of those things there,” said Thwala.
Remarkably though, Skhosana’s investigation does not mention Thwalamshiwa as a company that benefitted irregularly for was appointed irregularly for services linked to the AFCON 2014.