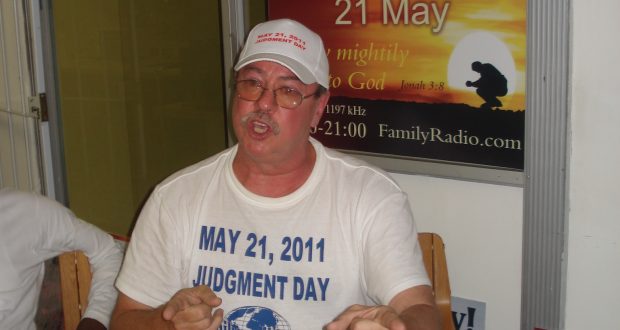 ” Tornado and volcanic ash not end of the world,” says doomsayer

A group of doomsday Christians say that a recent tornado that hit the United States and the volcanic eruption in Iceland were not signs of the end.

Family Radio leader in South Africa, Johannes Coetzee – who has announced October 21 as the new date for Armageddon after the world failed to end on Saturday – said God would instead send a series of global earthquakes that would swallow the world in sulphur and fire.

“The tornado (in Missouri, US) and the volcanic ash (in Iceland) have nothing to so with end times. Those are things that have always happened. When Jesus Christ returns, the world will experience earthquakes that have never been seen before,” warned the preacher.

Coetzee, who held a press conference in Mbombela on Tuesday afternoon, told journalists that he and the members of the movement were recovering from the trauma of the world not ending on Saturday as predicted.

He and 80 fellow believers gathered at the Devonshire Hotel in Braamfontein, Johannesburg, anticipating the end on May 21.

He said he and his two sons were constantly monitoring earthquakes across the world, using sophisticated computer software that would immediately signal any tremors occurring anywhere in the world.

“I slept while the two boys stayed by the computer. At times they would say, ‘Dad, it’s happening,’ and I would wake up, only to find that they had not read the machine correctly,” said Coetzee.

He denied he had stopped one of his sons, Joubert Coetzee, from completing his university studies.

“My son is a third-year graphic design student who dropped out on his own. He is the one who designed all our billboards. He believes in the rapture and he is the one who has strengthened me through all this,” he said.

He said it took him and his fellow believers two days to accept that the rapture had not happened.

But then they turned to the Bible to find out where they went wrong.

“We have gone back to Scripture to be corrected, and we now look forward to October 21 when God will bring an end to the world,” he said.

He advised all South Africans to keep on reading their Bible to gain more wisdom.

“The Bible said no one knows the date or hour, but did warn that in the end times the seals will be opened and wisdom shall increase. We are praying for more wisdom as we wait for October 21,” said Coetzee.

He insisted that the original date of May 21 was not entirely wrong, but was sent out “as a cry to warn the world that the end was coming.”

“We are the world’s biggest fools right now. We are called false prophets and liars all over the city. However, we still believe that the end is coming, and it is 150 days away,” he said.

“This is the same number that we find in Scripture right after Christ rose from the dead. When he died, his disciples were disappointed and went on with their lives. He rose and found them fishing and they were able to draw 153 fish, and none was lost,” he said.