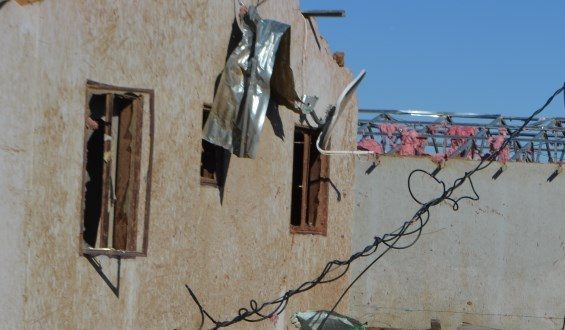 At least one person has been reported dead and many people left homeless after the heavy storm that swept across some parts of the Lowveld on Sunday night.

According to police report, the 65 year old man from Piennar was hit several times on the head by the hail and died instantly.

Areas affected include the entire Nkomazi sub-region and some parts of Mbombela and Bushbuckridge.

One of the affected, Alfred Nkosi of KaNyamazane said they had to spend a night at the local police station after their house was flooded.

“It all happened too fast and without a warning. At first, we thought it was just normal harmless rain but no, it just rained ice so big the size of a tennis ball. My house windows and roof were instantly damaged. Within minutes the house was literally flooded and it became totally unsafe for us. And after it had stopped raining we went to the KaNyamazane police station where we spent the night on the benches,” said Alfred Nkosi.

It was the same situation in Tekwane South and Piennar as scores of houses were destroyed forcing families to find temporary shelter.

The Maseko family had to spend the night in their car after their house was severely damaged and roof swept away by the storm.

“We tried everything to save what we could but the storm was too strong. The house was full of water, windows broken and the roof blown away. We had nowhere else to go and so we decided to sleep in the car until the morning. We don’t know what to do and where to start because everything is a mess,” said Godfrey Maseko of Tekwane South.

The storm also found its way to the Kruger National Park, where it forced the park to evacuate guests to places of safety.

SanParks spokesperson William Mabasa said some tourists had to be evacuated after their tents were damaged by a hail storm that wreaked havoc in the Skukuza area on Sunday afternoon. He said staff accommodation and several vehicles were also damaged.

The department of Co-operative Governance and Traditional Affairs (Cogta) has promised to come to the space and look at ways to help those affected.

Even though the department didn’t spell out as to exactly what would be their form of relief to the affected but it said to be studying the damage on the ground.

“We are mindful that there are some of our community members in local municipalities of Nkomazi, Bushbuckridge and the City of Mbombela whose property was damaged by the Sunday storm.

As a caring government, working together with these local municipalities and Ehlanzeni District Municipality’s disaster management unit, we are providing relief resources as a temporary measure.

Our officials are on the ground quantifying and consolidating the damage on the property so that permanent relief measures could be implemented,” said Speedy Mashilo, the MEC for Cogta.