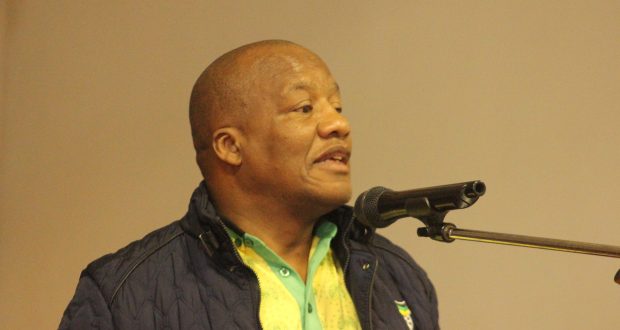 African National Congress and national assembly chief whip, Jackson Mthembu, made the call for the installation of ANC deputy president, Cyril Ramaphosa as the next president of the ruling party. But… he didn’t mention his name.

Addressing hundreds of supporters of the South African Communist Party at the memorial service of the late SACP general secretary, Chris Hani, Mthembu said that it was an established tradition in the ANC that the deputy president succeeds the incumbent president.

“When we elect a deputy we do so – so that he could be the president. OR (Oliver Reginald) Tambo was Luthuli’s deputy. When Mandela was released from prison, he was asked to deputise Tambo. In 1991 we made him the president. Thabo Mbeki became deputy president and in 1997 we made him president. In 2007 as Mpumalanga we said that Jacob Zuma should be the president, and we installed him in 2007, he was from deputy. So where’s the problem? We have been told that we should not mention names. All I’m saying is that when we make you a deputy president, it’s because we have a purpose for you,” said Mthembu.

Mthembu conceded that the ANC must have a woman president in his lifetime.

Mthembu promised that the ANC would resolve its problems so that it can pursue the national democratic revolution together with its allies.

He consoled SACP 2nd deputy general secretary, Solly Mapaila, who was nearly shot during the commemoration of Chris Hani’s death.

The police have failed to explain how a gunman was allowed into the ceremony, where only the protection services personnel were supposed to be armed.

“When we won the struggle it was not a one man show. If the price you must pay for saving the ANC is death so be it. If we must go through the cross to save the ANC – then we are prepared,” said Mthembu.