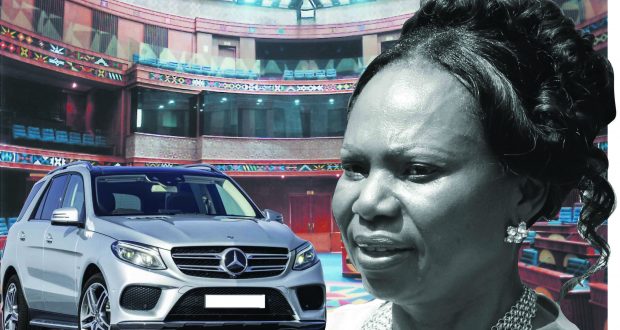 The Mpumalanga legislature may have lied in order to splurge almost R1.5 million on a new vehicle for speaker, Thandi Shongwe, after the vehicle she had been using was involved in an accident.

In a statement issued in September 2016 the Legislature claimed that the accident, which happened in August 2015, had made the vehicle unsafe for use by Shongwe.

Owner of Huson Autobody Panelbeaters, Callie Carlson, whose company repaired the vehicle, however, disagreed with the legislature’s statement.

“No one that I know, neither the assessor nor the insurance company would say that the vehicle is not safe. How can I give the vehicle to a client and I say it’s not safe? That’s my name that is on the line,” said Carslon, whose company obtained the third place in the 2016 Auto Body Repairs Centre (ABRC) awards.

Carlson’s statement rubbishes the legislature’s earlier claims about the condition of the vehicle in a statement issued by legislature spokesperson, Zamagambu Memela-Gamede.

“The assessment report from the Union Motors panel beaters indicated severe damages to the car which had also impacted on the safety features of the vehicle. Based on the assessment report, the Security Management Unit of the Legislature advised that, it was clearly risky to continue using the vehicle for the official business of the Speaker. The Security Management, therefore, strongly advised that a new vehicle for the Speaker be purchased hence the decision to procure a new vehicle in 2015 was approved,” said Memela-Gamede.

Carlson, however, says that only an approved repairer can make a determination that a vehicle is no longer safe for use.

“They don’t do assessments. I’m the authorised approved repairer. I know what the standard of repairs is supposed to be,” he said

The legislature has refused to release the alleged “assessment report”.

“The damage was only on the left front. It’s small staff, but the value (of the parts) at the end of the day is very (high). It’s cosmetic, it’s not like a structural damage. There’s not even an airbag that was replaced in any of the accidents. So for what reason can this vehicle not be safe to drive? Under no circumstance could anyone have said that the vehicle was not safe to drive,” said Carlson in an exclusive interview with Ziwaphi.

Yet, when Ziwaphi first published the story of the purchase of the Speaker’s vehicle last year, the legislature criticised the newspaper for stating that the damage to the vehicle was minor.

“The Ziwaphi Newspaper reporter suggests that the accident had resulted in minor damages to the vehicle. This is absolutely incorrect and distortion of facts as this is evident from the twelve months duration it has taken to repair the vehicle concerned by the panel beaters,” reads the legislature statement.

The legislature even engaged in apartheid-era style disinformation campaign through its official Facebook accounts and rightwing media to discredit the publisher of Ziwaphi.

An official in the office of the Speaker, calling herself “Princess Eunice Mashobane” even posted on her Facebook page a picture purported to be that of the Speaker’s vehicle taken after the accident.

“And this was said to be a minor accident,” she said in the post. An official in the office of the legislature speaker, Princess Eunice Mashobane embarked on a disinformation campaign.

When Ziwaphi sent enquiries about her, the legislature admitted that she was an employee in Shongwe’s office, but denied seeing her comments and the vehicle.

“(She is an) Executive Secretary in the office of the Speaker. I have not seen her (Facebook) views you are referring to. I have not seen the picture referred to,” said Memela-Gamede in response to a Ziwaphi enquiry.

When the legislature response was received, “Princess Eunice Mashobane” had removed the post.

A day later, a new fake Facebook account was created in the name of “Sfiso Mnisi”, and ironically “he” also used posted the same pictures that had been posted by “Princess Eunice Mashobane”.

The legislature claimed they do not know “Sfiso Mnisi”, who does not have a single friend and has only one picture of animals, but “he” seemed to know a lot about the accident.

“To all media personnel and individuals let us be honest here, this seems to be a major accident. Why are people so insensitive. Someone out of poverty and anger is trying to mislead the public. But we thank God for saving the speaker’s life. The accident occurred last year August, why did this journalists not report about it last year, why now after the whole year? What’s the motive Or should we believe the clarification by Mr Linda. If you have a problem Go to Mercedes, insurance and Panel beaters to establish the truth. The car was fixed for over 12 months bekufanele asebente ngani speaker,” said “Sfiso Mnisi”, reads the post which is still on the legislature’s Facebook page. It is unclear how “Sfiso Mnisi” knew about this information because it had never been published anywhere, but it’s information that was only known to the legislature’s personnel.

Carlson, however, also explained why the vehicle took long at the panel beaters, and that it had nothing to do with the extent of the damage to the vehicle.

“It took only three months to fix the vehicle, I only got the authorisation (from the insurance) in May (2016),” said Carlson. The vehicle was only authorised by the insurance on the 5th May 2016. When I get authorisation I order parts. The first parts started coming May and June 2016,” he said.

When this new information was brought to the attention of the legislature, its spokesperson declined to comment.

“In relation to the questions about the Speakers’s vehicle which was involved in an accident, we believe we have responded enough and we have no further reason to entertain this matter further,” said Memela-Gamede.

It is not the first time that the legislature has been caught lying about the purchase of the vehicle.

In October 2016, the legislature claimed in a written response to a media enquiry that the money to purchase the vehicle was appropriated during the budget appropriation adjustment in November 2015.

“The budget for the vehicle that was purchased in 2015, was allocated by the Provincial Treasury during the appropriation adjustment, …the Legislature requested funding from the Treasury after the accident occurred in August 2015, and the replacement vehicle was purchased in November 2015, the Speaker had to use the fleet of the Legislature and on some occasion, the Speaker had to use Legislature’s VW Polo vehicle,” said Memela-Gamede at the time.

Documents seen by this journalist, however, show that the legislature had already bought the vehicle by the time of the budget appropriation adjustment.

In an internal memorandum, seen by this journalist, legislature executive manager for corporate services, George Mthimunye, claimed that there was a budget of R1 million for the vehicle.

“…We request approval to initiate the procurement processes with a view to purchase a new vehicle and replace the one being repaired. We also advise that the available budget for the purchase of the Speaker’s vehicle is R1 million,” reads the memorandum addressed to legislature secretary, Linda Mwale, dated 10 November 2015.

It was, however, only on the 20th November 2015, that member of the executive council (MEC) for provincial treasury, Skhumbuzo Kholwane presented the provincial budget appropriation adjustment. Nine days after the legislature had already procured the new vehicle.