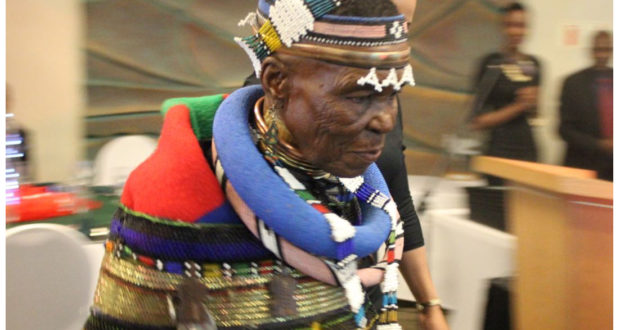 Legendary Esther Mahlangu received yet another award from the tourism minister.

World renowned Mpumalanga artist Esther Mahlangu has won the prestigious Ministers Award at the National Lilizela Awards, for her contemporary artwork which has taken the Ndebele culture to the global stage. The awards were hosted by Top Billing presenter Bonang Matheba at the Sandton Convention Centre in Johannesburg on Sunday, 16 October.

Mahlangu has created a successful brand for her art after growing up in a poor household in Kwamhlanga. She first gained international recognition in 1989 at a European art exhibition titled “Magicians de La Terre” (Magicians of the World). In 1991 she was commissioned by BMW to create a unique African Art Car from a BMW525i, painted in colourful Ndebele motifs. Mahlangu is known for her bold large-scale contemporary paintings, referencing her Ndebele heritage.

After receiving the award, Mahlangu said that she did not expect to win and receive such widespread recognition.

“I was not expecting to be celebrated as much as they have celebrated me here today. I am very much looking forward to share this award with my province and mostly the Kwamhlanga community, and with my students too,” said Mahlangu.

Mahlangu has started an art school in the backyard of her home in Kwamhlanga, teaching young people the ancestral art of the Ndebele tribe. She also runs a guest house.

Mahlangu’s artwork has been exhibited in Australia, America, Japan and Europe, with some of her most famous murals featuring at the Bocum Museum in Germany, at the Virgin Atlantic music store in Times Square and the National Museum of Women in the Arts in Washington DC. Mahlangu was also commissioned to paint the tail of a British Airways Boeing.

Derek Hanekom, Minister of Tourism, described how special this particular award was to him and the whole world, in honouring this “amazing African art and culture artist”.

“The Lilizela awards are the hallmark of excellence in our industry. It is heartening to note that entries for the award have increased by 18 percent and as tourism grows, its contribution to the country’s GDP improves, creating more jobs, empowering communities around South Africa,” Hanekom added.

“This is the woman that I so love, cherish and look up to; and a role model to artists all over Africa. We are so proud she received the Ministers Award, she deserves it and we hope she rises further beyond our borders,” said Matheba.

Mpumalanga also won awards in four other categories within the tourism industry.

“We congratulate all the winners from Mpumalanga. This has placed us in a better spot to promote the province, and tourism in Mpumalanga,” said Xolani Mthethwa, head of tourism at the Mpumalanga Tourism and Parks Agency.