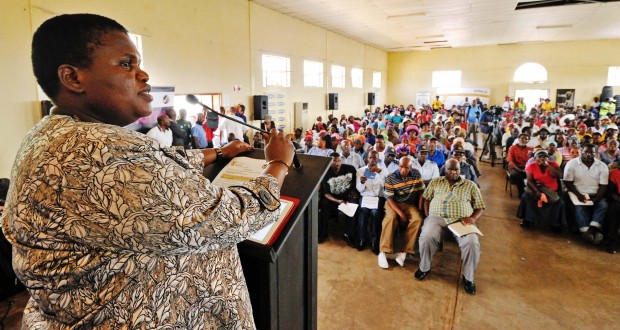 Minister of Communications Faith Muthambi during Imbizo at Mariti near Bushbuckridge in Mpumalanga.

The residents of Marite Trust in Mpumalanga can’t wait to switch from their analogue platform to digital terrestrial television (DTT).

The residents, who live between Bushbuckridge and Hazyview, learned about DTT when communications minister Faith Muthambi recently visited their area to share information about the expected switch.

“We are very optimistic about the project and we believe that those who could not afford DSTV will able to watch a television with clearer pictures.  What is even exciting is that we will be the first community in the province to benefit from the project,” said Thapelo Mashele (32).

Mashele said although elderly people in the area have no idea what this digital switch is all about, their grandchildren will now be able to explain to them.

The minister explained that DTT will come with better picture quality that the current analogue that is generally used in South Africa.

The analogue platform, which works for both radio and TV, requires a large amount of bandwidth to transmit picture and sound information.

The analogue signals use a lot of bandwidth, limiting the amount of signal that can get through at any one time. The digital signal requires less bandwidth and can transmits as much as nine time the information that an analogue signal transmits.

“There would be more free-to-air channels covering culture, youth, education and health matters, to mention but a few. In order to view and enjoy the digital television signals on an ordinary analogue television set, you will need a set top box (STB),” said Muthambi.

Muthambi said the government will be distributing free STBs to poor households.

She said in order to acquire an STB before the analogue signal switch-off, Marite residents will need to register at their local Post Office for the STB.

She added that she had already launched the registration of STBs for poor TV-owning households in the Square Kilometre Array (SKA) communities of Keimoes and Kai Garib in the Northern Cape.

“To qualify for a free STB, applicants must prove that they are South African citizens, that their household income is R3 200 or less and that they have a valid TV license,” said Muthambi.

South Africa failed to implement the broadcasting digital television within the International Telecommunications Union’s (ITU) agreed timelines. The ITU’s agreed deadline for the switch-off of analogue television signals was June 17, 2015.

This was due to a High Court case involving some broadcasters.

The minister said South Africa’s network was 82% ready for DTT.

Bushbuckridge is near the Mozambique border but the good news is that the minister has already signed agreements of cooperation with Mozambique, Botswana, Lesotho, Swaziland and Namibia to try to avoid possible television signal interference threats from outside South Africa’s borders.

Community member Jackson Nkuna (44) said the new developments would be more welcome if they came with free TV licenses.

“We will only be happy if these migration means the poor will no longer pay TV licenses because it is a burden for those who are unemployed or working at the local farms,” said Nkuna.