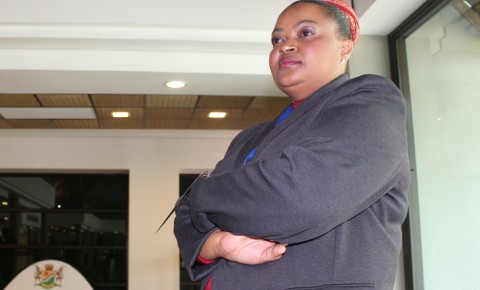 The widow of one of Mpumalanga province’s so-called January murders predicts the collapse of the Mpumalanga “regime”, following the withdrawal of the case against three suspects who were implicated in her husband’s murder.

A visibly irate Pinky Mpatlanyane, whose husband, Sammy, was assassinated in January 2010, broke her two-year silence this week in an exclusive interview with Ziwaphi in court on Monday. She said that she was shocked, but not surprised by the court decision.

“I am deeply shocked and devastated with the withdrawal of the case, but not surprised with the South African law. This type of modus operandi was used by the old government against blacks and it is so sad that today it is emulated and practiced by blacks on blacks,” she said.

“An application for referral for psychiatric evaluation was made and the results came out (on the) 20th of June 2012 which basically declared him unfit to stand trial as he is not in a position to contribute meaningfully to the proceedings, and thus he will not be in a position to assist in formulating his own defence,” said NPA provincial spokesman Medupe Simasiku in a statement on Monday.

According to Simasiku, the other two suspects were arrested “on the strength of the information supplied” by Mashava.

The NPA also made another startling admission, that one of their own, whom they refuse to disclose, also played a significant role in the collapse of the police case after he misled the prosecution about the disappearance of his police issued firearm, which was used in Mpatlanyane’s assassination.

“The owner of the firearm pointed out accused (number) 2 (Issa) at an identification parade and it later emerged that the police officer who lost that particular firearm lied to the prosecution and investigators as he confessed that the ID parade was staged and he does not know who stole his firearm, thus rendering the case against accused (number) 2 not ready for court,” said Simasiku.

Previously, police investigator and member of the organised crime unit Captain Sunnyboy Moloko, had earlier told the court that eight people were involved in the murder. This included two South Africans and five foreign nationals who came from different parts of the Southern African Development Community (SADC) countries.

Mpatlanyane’s widow however, believes that the police’s theory that her husband was murdered by foreigners was merely to deflect public attention from the real killers and motive for his murder.

“These people have caused me grave pain, sorrow and suffering. Thanks to the citizens from other South African Development Community SADC countries (who) came together, conspired and subsequently agreed on the execution of my husband. This is just one proof that this assignment was highly organised and of great importance in the province,” Mpatlanyane said.

The motive for the murder of Mpatlanyane is still unknown, however, his former colleagues within the department of culture, sports, and recreation believe that he was killed for blowing the whistle on corruption related to the construction of the department’s archives building and the Mbombela stadium.

Mpatlanyane’s widow believes that her husband’s former employers have an explanation to make.

“One cannot ignore the fact that my husband has been killed with a pistol belonging to a policeman, and two months down the line another policewoman was given (his) post.

“All I am asking is for the department of culture, sports and recreation to tell the world what is it that my husband had done to deserve such cruelty,” said Pinky.

Sammy Mpatlanyane, who was an activist of the African National Congress, was killed under mysterious circumstances in his Nelspruit home on the 98th anniversary of the ruling party, January 8. The organisation’s president, Jacob Zuma once said that the ANC will rule until Jesus returns, however, Mpatlanyane’s deeply religious widow predicts the collapse of the Mpumalanga province regime.

“I will soldier on in prayer and believe that all regimes come to an end and this too will collapse one day and only the rule of the Almighty God will rule forever and bring all what took place in the dark to light,” she said.