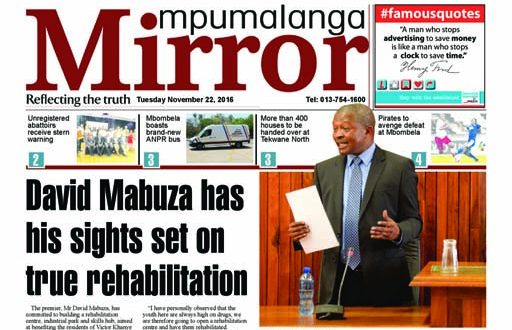 Disgraced Caxton journalist Mbekezeli Mbuli is willing to take a lie detector test to prove his claims that he was promised a job and a luxury German car to discredit Mpumalanga Premier David Mabuza’s political rivals in the ANC.

He has accused suspended ANC Youth League provincial secretary Musa Mkhatshwa and former league provincial executive member Nathaniel Mashile of promising him a BMW and a job at the Mbombela Local Municipality if he wrote negative stories about Mabuza’s political opponents.

“If Caxton allows it, I do not have a problem taking a lie-detector test to prove my allegations against Mkhatshwa and Mashile,” Mbuli told African Eye News Service.

Mbuli’s boss, Lowveld Media editor Irma Green, said the company would not allow Mbuli to take a polygraph or lie detector test to prove his allegations.

“He has already [undergone] internal disciplinary processes and has been sanctioned,” said Green.

Asked whether Mbuli would be fired after admitting that he submitted stories pre-written by other people as part of a smear campaign against provincial health and social development MEC Clifford Mkasi, Green said: “It is none of your business.”

Non-committal on taking the polygraph test

Both Mkhatshwa and Mashile have denied influencing Mbuli’s writing, but would not commit to undergoing a polygraph test.

Mkhatshwa, who insisted that Mbuli had falsely implicated him in the scandal, said he would need to “consult” before agreeing to a lie detector test.

“I cannot be pressurised to take a lie detector test to prove my innocence and I am no longer willing to talk to journalists about Mbuli’s allegations. I am very much relaxed because I have not done anything wrong, but if you want me to take the lie detector test then allow me time to consult relevant people.”

Mkhatshwa, who was suspended from the ANCYL for being ill-disciplined, refused to say who he would consult.

He also asked for time to think about taking a lie detector test.

“If taking the test means my name will be cleared, then let me think about it and come back to you,” said Mashile.

He accused Mbuli of making him a celebrity for the wrong reasons.

“I am only interested in dealing with issues that affect the poor masses in our communities. Mbuli is making me a celebrity in the wrong way. I am thinking of suing him and his paper,” Mashile said.

During Mpumalanga’s provincial budget speech on Tuesday, the Democratic Alliance’s leader in the province, Anthony Benadie, challenged Mabuza to appoint a commission of enquiry to investigate what he called “Mbuligate”.

“He must appoint a commission of enquiry and clear his name and the name of the Mpumalanga government,” said Benadie.

Mabuza did not react to Benadie’s request. Instead, the leader of government business in the provincial legislature, human settlements MEC Siphosezwe Masango, said it was not a matter for the legislature to discuss.

During a recorded confession to the health and social development MEC, Mbuli can be heard saying he wrote a series of stories against the politician in return for a job and BMW.

Mkasi has been punted to challenge Mabuza as provincial chairperson in the ANC provincial conference, which will be held next month.

Mbuli named Mkhatshwa as the man who told him which articles to write. He admitted to putting his by-line on one particular article, which he said had been written by Mkhatshwa himself.

The story, published in February, quoted a nonexistent Professor Robert MacMillan as questioning Mkasi’s leadership. It was published in Mpumalanga Mirror, a biweekly insert that goes in all regional papers of the Caxton publishing group in Mpumalanga.