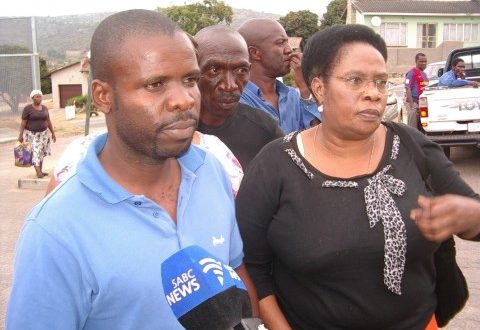 Family members of slain Mbombela speaker, nephew Patrick Mohlala and his sister, Joyce Mohlala, outside KaBokweni Magistrate's Court on Monday. His widow, Bonny, did not wish to be photographed.

The widow of murdered Mbombela municipal speaker Jimmy Mohlala is convinced that the five people who have been arrested in connection with her husband’s murder have been framed to protect the real killers.

The widow, Bonny Mohlala, told African Eye News Service (AENS) that the real killers were still on the loose while innocent men and a woman faced murder charges.

”I have a feeling that these people were framed to protect the real killers. I am also tired of this case, it has been dragging on for too long and the family needs closure now,” said Mohlala.

Mohlala and her son, Tshepiso, who was shot in the leg when his father was killed, previously told journalists that several men in police uniform abducted them from their KaNyamazane home and took them to a secluded area where they were tortured.

Mohlala said they were forced to make a confession regarding the murder of her husband.

Her husband was killed at his home in KaNyamazane on January 4 2009, just a week before he was scheduled to testify about former municipal manager of Mbombela local municipality, Jacob Dladla’s refusal to implement 361 council resolutions, as well as Dladla’s role in the poor management of the Mbombela 2010 stadium project.

Five people, including two police constables were arrested for the murder more than a year after he was killed.

The five suspects who are implicated in the case are: former constable Dumisani Mhlanga, 34, of the Nelspruit flying squad, former constable Musa Mkhabela, 31, of the KaNyamazane police station, Sakhile Mabika-Mona, 30, his mother Jenny Mabika, 56, who is a cleaner at Rob Ferreira Hospital and an unemployed man Moses Mahungela, 33. All live in Matsulu township outside Mbombela and are currently out on between R6 000 and R10 000 bail each. They made a brief appearance in the KaBokweni magistrate’s court last week and their bail was extended until May 26 for the National Prosecuting Authority to set a trial date.

Their lawyer, Slungu Thobela, said he was relieved that the trial date would finally be set so he can prove that the state does not have a case against his clients.

”The state claims that they are done with the investigation and they are ready to prosecute. If they had enough evidence against my clients they would have prosecuted immediately after my clients were arrested in October last year, instead they kept postponing until now. I even doubt that they will give us a trial date come May 26,” said Thobela.

He said he had been ready for trial since his clients were arrested._Meanwhile, after attending an internal disciplinary hearing, Mkhabela and Mhlanga, were dismissed from the police service early this month after provincial police commissioner Thulani Ntobela found them guilty of serious misconduct in relation to Mohlala’s murder.

Provincial police spokesman Lieutenant Colonel Leonard Hlathi told AENS then that in terms of the South African Police Services Disciplinary Regulation 20 of 2006, if an internal investigation finds that a police officer is guilty of serious misconduct, the provincial commissioner is entitled to dismiss them from work, irrespective of the outcome of any criminal case.

He said after being implicated in the speaker’s murder, the cops were charged internally with several charges, including corruption and violation of the South African Police Service’s Code of conduct.

”The evidence gathered suggest that the constables were at the murder scene using state resources for untested, yet questionable reasons, which warranted an official removal from the police service. They were found guilty and sanctioned with dismissal effective from March 8, 2011,” said Hlathi.