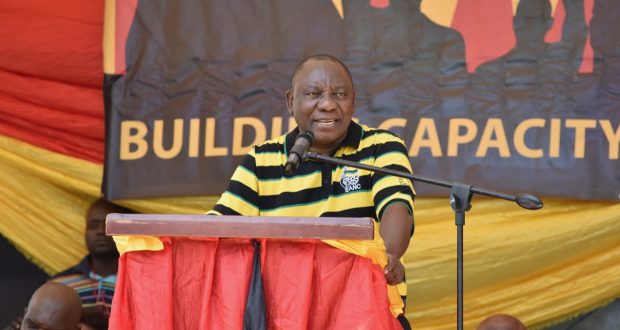 Economic Freedom Fighters will report Mpumalanga’s MEC for culture, sports, and recreation to president Cyril Ramaphosa after she splurged R231724,93 on her cellphone in just three months.

This was after Mpumalanga premier Refilwe Mtsweni refused to accede to the EFF’s demands to remove MEC Thandi Shongwe after the leaking of invoices showing an average of R73 000 per month usage on her government issued cellphone.

“Pursuant to the number of fraud and corruption cases laid against Hon BT Shongwe during her tenure as the Speaker of the Provincial Legislature and the recent proven allegation of abuse of office as an MEC and misuse of the state cell phone to an amount of more than R60.000 a month, the EFF hereby request the Hon Premier Mrs RM Mtsweni to recall Mrs BT Shongwe as the MEC for Sports, Recreation, Arts and Culture with immediate effect,” said EFF provincial leader, Collen Sedibe

The EFF leader gave Shongwe a five-day ultimatum, failing which, he would report her to president Ramaphosa.

“The continuous keeping Mrs BT Shongwe in the office by the Premier will mean she as well is condoning fraud and corruption and the stealing of the tax payer’s money. In (the) light of the above we expect the Premier to respond to us in writing about the action taken within 5 working days, failure which we will have no option but to take the matter up with the State President to intervene,” said Sedibe.

Shongwe hit back through a two-page advertorial in a local newspaper where she accused “members of the opposition” of fraud and corruption and “fabricating lies”.

Mtshweni is on record that she would continue her predecessor’s cost curtailment measures which have crippled the public service in Mpumalanga, but for more than three weeks since Ziwaphi sent a written enquiry, her spokesperson, Zibonele Mncwango, failed to respond.

“The costs incurred were for data (router) usage, not voice calls. She regularly communicates with provincial, national and international stakeholders as part of implementing the mandate of the department and creating opportunities for our people. In June, the MEC used data to stay in contact with departmental officials and other stakeholders who were in Russia as part of the South Africa/Russia Season. In July, the MEC used her router as a WiFi hotspot in the office as she had trouble with Internet connection due to renovations in the office. In August, the MEC undertook an outbound mission for a week in Kingdom of eSwatini and she used data at international roaming rates to communicate during the trip,” said Mphahlele.

Shongwe’s lavish spending habits can be traced back to the legislature when she was the Speaker of the Mpumalanga provincial legislature. Then, she bought a brand-new Mercedes Benz under the guise that the one she had bought before was not safe after it had been involved in an accident.

The vehicle cost the legislature more than what she was entitled to.

Earlier this year she was also exposed for spending about R50 000 of tax payers’ money in hotel expenses during the 2015-2016 festive season.

Legislature spokesperson, Zamagambu-Memela defended Shongwe, claiming that she was doing legislature work between 22 December 2015 and 2 January 2016 in Gauteng province. This was despite the fact that the legislature was closed during that period.

She refuted claims that Shongwe spent the holiday season at the hotel while attending a pilgrimage by Malawian “miracle” pastor Shepherd Bushiri.

The legislature programme which shows all the activities of the members is a public document, and during that year, there was no Mpumalanga legislature activity in Gauteng province.

Shongwe is believed to be a leading member of the miracle church, and has a reputation of giving out lavish gifts to the church’s leaders.

Last year she donated a brand new luxurious Mercedes Benz to Bushiri’s son, Wiseman, during a church ceremony in Mbombela.

In a video that went viral on social media, Shongwe is heard asking Wiseman to “raise billionaires and millionaires” and urged congregants to donate money to Bushir’s son.