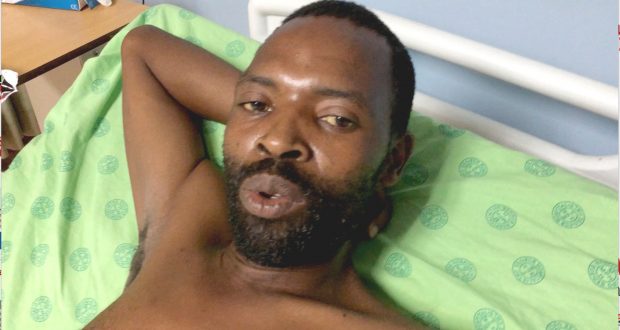 Every patient’s wish when he or she gets to hospital is to be healed and to improve their longevity.

After all, the dictionary describes a hospital as an institution providing medical and surgical treatment and nursing care for sick or injured people.

It is these attributes of a hospital that renewed the hopes of a father of six, that he would be healed from an ailment that had been troubling him for a long time.

Thus, when the transfer finally happened on 8 March 2018, Sibeko hoped that he would get the best treatment at the best facility, and possibly also know more about his ailment. But, little did he know that it was the beginning of a 16-day journey of neglect, pain and despair. In fact, it was an experience of everything opposite of what a hospital should be.

His experience, instead, made him prefer death than the pain that he endured at the place of healing.

Our meeting with Sibeko happened by accident.

I had been called to write a story about mosquitoes that were wreaking havoc at the provincial hospital, helping themselves to the patients throughout the night.

A whistleblower, whose family member was one of the patients, thought it was a newsworthy story that mosquitoes bite people in a hospital ward.

He had just bought an insecticide spray and an air fan to fend off the blood-sucking insects.

Entering the hospital, I was greeted by a reddish liquid substance on the floor of the lifts. I can’t conclusive say it could have been blood, but one thing for sure, from that day on, I take my shoes off, whenever I get into my house.

As I entered the ward, indeed, there were mosquitoes everywhere, some even pounced on us during the interviews.

He disclosed that when he was admitted in the morning, a needle was pierced on his veins on the forearm, in preparation of application of a drip.

Eight hours later, there was still no drip, and he was complaining of excruciating pain on his arm, because after inserting the needle, it was blocked and already creating a wound on his arm.

During my interviews, one of the patients felt that their story wasn’t as distressing as the neglect that was meted on another patient in the same ward. That’s how I got to talk to Sibeko.

“I can’t eat properly. I am dependent on the drip feed. My drip feed ran out in the morning. It must have been between 11 to 12, even though I’m not exactly sure of the time. Now I’m feeling dizzy. When I ask the doctors what my sickness is, I don’t get a satisfactory answer,” said the soft spoken SIbeko.

He said this deeply hurt him.

“When I ask to be transferred (back home), they are declining,” he said.

What Sibeko meant by being transferred, however, he was not meaning to be transferred to another hospital. In fact, he wanted to be discharged from hospital so that he could be with his family in case he doesn’t make it.

“I want to be transferred back home, because I see that my last hope was in this hospital, but I’m not getting any help. It is the same as being at home. Secondly, what hurts me the most is that I can’t sleep at night, I’m experiencing pains until the morning. I’d always wake up and try to walk about, thinking that my condition would change, but there’d be no improvement,” he said.

When this journalist visited the patient, 11 days after his admission, his stomach was visibly swollen. He said when he arrived it wasn’t that swollen.

He asked this journalist to touch his stomach on the side. It was as hard as a brick. It didn’t feel like flesh.

“My belly wasn’t this swollen, it’s deteriorating,” he said.

Sibeko told this journalist that since he had arrived 11 days before, he had not received any treatment.

“When they arrive in the morning, doctors open my file, scribble a few things and then they leave and return the following day, and tap on my belly and leave again, without telling me what my problem is,” he said.

He said that he was not given pills and pain killers.

He said that what he does sometimes get is an injection and the drip.

“Once the drip runs out, it’d be changed around 9 pm, and by the following morning it’d be finished whereas I can’t eat. I depend on it,” he said.

“My circumstances are very painful. I don’t even know how to express it because our wish was that now that the government is under our people, life would change, that we’d live better, but it’s getting worse than before. We are not treated well at all. Even our nurses who take care of us, would leave us without knowing where they are, as you can hear that I can’t speak properly, when my sickness strikes, I run out of breath and lose my voice. At times when my family phones me, I can’t talk to them, and they end up crying. That’s why my wish was to die near my children, and get out of this hospital.”

Sibeko’s wife and children have not been able to visit him, but he said that some extended family members and friends have been paying him visits.

“My children cannot afford to come because my financial circumstances do not permit. I’m unemployed…”

Four days later Sibeko drew his last breath without realising his last wish – to see his children before he died.

The spokesperson for the department of health, Dumisani Malamule denied all the allegations made by Sibeko, but he confirmed his death.

“The patient died on the 23rd March at 07h25 am.  He came in as a transfer from eMbhuleni hospital with herbal intoxication,” said Malamule.

ON ALLEGATIONS THAT SIBEKO WAS NOT RECEIVING ANY TREATMENT

The patient was admitted on the 8th March.  Large numbers of medications including drips were prescribed for the patient from the date of admission until passing.

ON ALLEGATIONS THAT THE DRIP WAS NOT BEING REFILLED

According to our records the intake and output of drips have been recorded from the 8th to 23rd March.

ON ALLEGATIONS THAT THERE ARE MOSQUITOES IN THE WARD

Not true.  Our records indicate that malaria spraying by the Department has been conducted in all wards including ward 3 where the patient was admitted on the 2nd November 2017, and12th February 2018.

Malamule’s denial happened despite a video showing at mosquitoes caught on camera flying on the face of one of the patients.

ON ALLEGATIONS THAT THE SHEETS WERE BLOOD STAINED

With every discharge the beds are scrubbed clean and new linen put for patients.

Again, this allegation is despite a video footage that shows a patient who had been admitted on the morning of the 19th March 2018. He was still wearing his own clothes.

The MEC for health, Gillion Mashego, however, adopted a different approach, after listening to the story.

He promised this journalist that he would investigate, and by the following morning, the social media was abuzz about his unannounced visit to the hospital.

He promised to give feedback to this journalist on the outcome of his investigation.

Previous: PRET is like a child that’s out of control, Gvt
Next: VIDEO: MEC Kholwane explains PRET-Govt relationship