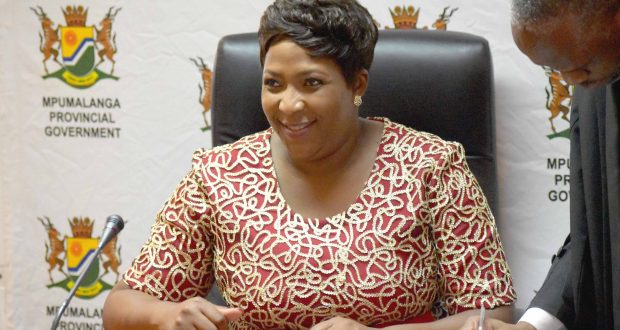 Mpumalanga premier, Refilwe Mtsweni was elected last Tuesday and she became the province's fifth premier since 1994.

Refilwe Mtsweni, the former MEC for Co-Operative Governance and Traditional Affairs (Cogta) has been appointed as Mpumalanga province’s fifth premier and the province’s first female premier since 1994.

The provincial legislature unanimously elected Mtsweni at a sitting of the legislature held on Tuesday morning at Mbombela.

Judge President of the Mpumalanga division of the High Court, Francis Legodi swore Mtsweni in front of a number of members of the executive council, government officials and journalists.

Soon after her appointment, Mtsweni wasted no time and announced the changes in the executive council.

This time, Judge Legodi did not leave anything to chance. He ensured that he had Shongwe’s resignation letter from the position of Speaker of the legislature before she was sworn in as MEC.

Legodi publicly read the resignation letter, which was addressed to the deputy speaker of the legislature, Violet Siwela.

“I’m having this resignation and apparently it has been accepted and as a result there is no impingement to what now follows. This is the taking of an oath of MEC in terms of Schedule 2 of the Constitution, and I am going to administer this oath after having being satisfied that there is no legislative impingement to the appointment and the swearing in of the candidate as the MEC,” said Legodi.

Last month, Shongwe committed a series of blunders when she claimed that she had received a letter from former premier David Mabuza appointing Mtsweni as the Acting Premier. As a result, Mtweni was sworn in.

The Democratic Alliance pointed out that Mtsweni’s appointment by Mabuza was irregular, because the latter had already submitted a letter of resignation to Shongwe – meaning that he was not eligible to appoint anyone because he was no longer the premier or a member of the Mpumalanga provincial legislature.

Shongwe did not disclose the reason for her resignation, but her reign as the Speaker of the legislature was characterised by scandals of tender irregularities in the appointment of a service provider to revamp the legislature chamber, buying of luxurious vehicles, and failing to act on allegations of sexual harassment of a female legislature employee by an executive manager during a strategic planning session of the legislature. The alleged victim in the sexual harassment case was later given a new position with better perks in what is believed to have been a ploy to silence her.

The Economic Freedom Fighters in Mpumalanga also opened several criminal cases against Shongwe and legislature secretary, Linda Mwale for alleged corruption in relation to the appointment of a contract for cleaning services and the Provision of SAP Support and Maintenance Services.

The SAP Support and Maintenance Services tender was advertised three times after the successful bidder, in the original tender, refused to accept the appointment when he was allegedly told to partner with another company which had not tendered for the service.

The main opposition party’s leader, Jane Sithole earlier congratulated Mtsweni on her election and called on her to tackle corruption in Mpumalanga.

“Many people are pinning their hopes on you. You have the opportunity to throw out the corrupt ones and replace them with good ones, and the rest will take care of itself.

“We look forward to take you and your executive, toe-to-toe in this house. Our support would always be based on what is right,” said Sithole.