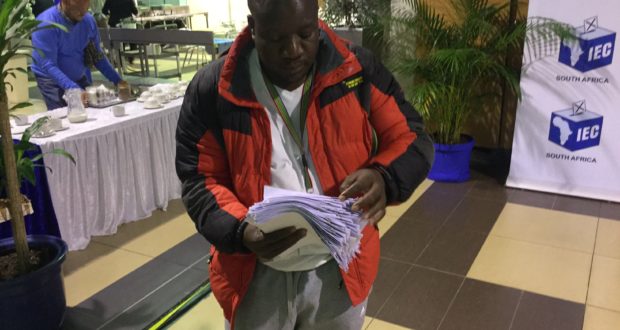 EFF member of parliament in Mpumalanga, Cyril Chuene, with some of the results slips confiscated from an "illegal" capturing station.

The Economic Freedom Front in Mpumalanga has accused the Electoral Commission of South Africa (IEC) of running an “illegal election” results capturing centre in Hazyview.

EFF leader in Mpumalanga says that his organisation’s party agents alerted him to the fake elections results capturing centre, which non of the contesting parties were aware of, in the early hours of Thursday morning.

“I received a call from our party agents that the IEC in Hazyview was refusing them to observe the capturing of the election results. Results are being captured in one centre in Mbombela. That is an illegal capturing station. They don’t allow our agents to observe the capturing. When I asked them how they don’t allow our party agents to observe when they capture, they claimed that they don’t have space,” said Sedibe.

He said that when he inspected the result slips which were being used to capture the results, he discovered that the number of votes for his party were tempered with.

“The result slips had 455 votes (in favour of EFF), however I discovered that they had cancelled the original number and replaced it with 56 (votes). The same applied to three other slips, then I took them as evidence and surrendered them to the provincial results operation centre (ROC),” said Sedibe.

In another related incident, Spokesperson for the Bushbuckridge Residents Association (BRA), Cleopas Maunye, alleged that there were irregularities at Ward 20, Phendulani voting station.

“We had a situation where the presiding officer gave a voter more than three ballot papers. It was noted, we made an objection and that person was expelled from the station. During counting it was discovered that there (were) more ballots, as compared to the number of people who voted in the station. Then we made an objection with the IEC. The IEC office told me that they were busy with the capturing and when they are done, they will send the objections to the provincial office for them to take a decision,” said Maunye.

Provincial Electoral Officer (PEO) for Mpumalanga, Steve Ngwenya said that the IEC did not receive any objections from either the EFF or the BRA.

“I have not received any objection. There were complaints that were raised in a party liaison committee meeting. We have explained what we have found to have happened. Parties accepted that. Maybe one or two, EFF will say they are not satisfied. In that case where the explanation is not accepted, the logical thing is tor the party to lodge an objection, which is provided for in our electoral legislation. I can say again, EFF is here with us, they have not lodged a complaint, they have not lodged one objection,” said Ngwenya.

Ngwenya said that he would not talk about BRA as the organisation fails to attend the meetings of the Party Liaison Committee (PLC) and he said the results from Bushbuckridge will be released as soon as they are finalised.

Maunya, however, said that the release of the Bushbuckridge municipality would leave them with no choice but to raise the matter with the national office of the electoral body.

The ruling African National Congress seems set to retain control of all Mpumalanga’s 18 municipalities as well as the three district municipalities, with over 70% votes, against the DA’s and the EFF’s 9,42%.